The Italian air force has for the first time deployed some of its Eurofighter Typhoons to a Red Flag-series exercise in the USA, with eight of the aircraft at Nellis AFB in Nevada.

Drawn from its 4th, 36th and 37th Fighter Wings and deployed from Grosseto air base, the detachment includes three aircraft in the Eurofighter programme’s latest P1EB software standard, and five Tranche 1 examples. The former are at times being operated carrying a Rafael Litening III targeting pod and a pair of inert GBU-16 Paveway II laser-guided bombs. 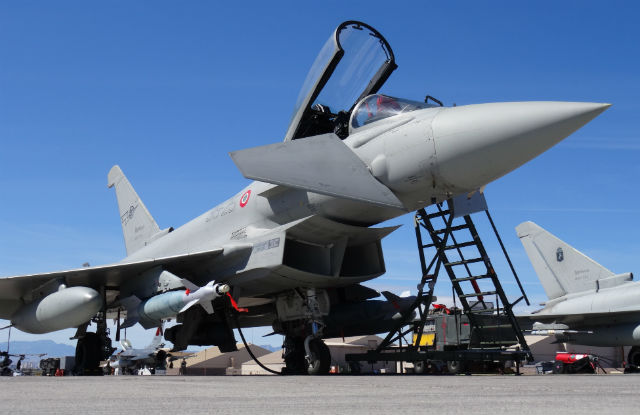 Detachment commander Col Marco Bertoli says the demonstration of the Typhoon’s “swing-role” capability during Red Flag 16-2 – which includes releasing GBU-16s – is intended to support Italian industry’s efforts to export the type. The Italian air force would only consider using this air-to-surface functionality “in very specific, low-intensity scenarios”, he adds.

The service already operates its AMX and Panavia Tornado IDS strike aircraft in the close air support and ground-attack roles, and will also be introducing the Lockheed Martin F-35 to frontline service in this decade.

“Eurofighter will be the backbone of the Italian air force’s air defence for the coming years,” Bertoli notes, referring to its primary role for the nation.

Six Typhoons are being flown on two missions per day during the exercise, with Italy having sent 24 pilots to participate in the manoeuvres. Its total commitment is of around 180 personnel.

Flight International will publish a full report on the Italian Typhoon participation in its 5-11 April issue.