The US Army has successfully deployed its new aerostat-based radar surveillance system over Aberdeen Proving Ground in Maryland, with the system to be used to monitor incoming threats over Washington DC.

The first aerostat was inflated on 14 December, after which the radar system was installed. Now it is flying it will take a few days for the radar to become active.

“We have a long list of checks that we have to do as we power up the system,” says Doug Burgess, JLENS programme manager at Raytheon. “[Now] it is up and flying, Raytheon will initially operate it and then hand it over [to NORAD].”

The two-aerostat JLENS orbit consists of fire control and surveillance radars sitting at 10,000ft which are capable of detecting incoming missiles and unmanned air vehicles from some 295nm (546km) away. 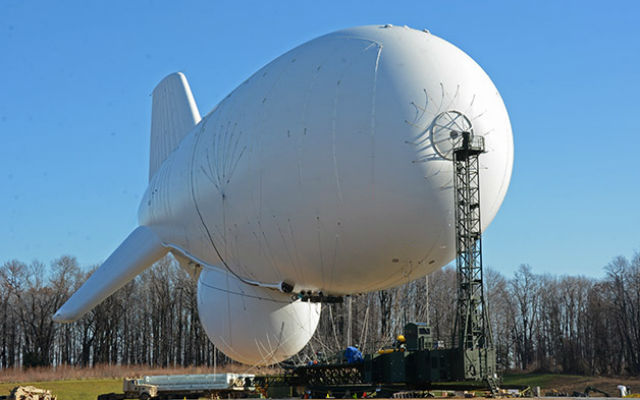 Only the first aerostat in the deployed JLENS system is flying, but the second is expected to become operational in 2015, Burgess says. “We should be notionally ready by the end of January,” he adds. The radar system for the second aerostat is ready.

The two systems will be placed some 4km apart in order to avoid the two tethers crossing in high winds. One JLENS orbit takes six people to inhaul/exhaul the system, and a team of three to four to operate.

Two JLENS systems have been developed, the second of which has entered the army’s strategic reserve.

Under the instruction of NORTHCOM, the army’s A Battery, 3rd Air Defence Artillery will operate the system. Full operational capability for the JLENS is expected around April.

JLENS aerostats will be operated on a 30-day nominal deployment, after which they will be brought down for maintenance before being elevated again.