The flight took place on 5 October from KAI’s Sacheon factory, and last about one hour and twenty minutes, KAI says in a statement.

The KT-100 variant features a video/voice recorder, identification friend-or-foe equipment, and other modifications.

Seoul will acquire 23 KT-100s, with all aircraft, flight simulators and other equipment to be delivered by the end of 2016. After acquiring basic skills in the KT-100, South Korean trainees will move up to the KT-1 basic trainer, followed by the T-50 advanced jet trainer. 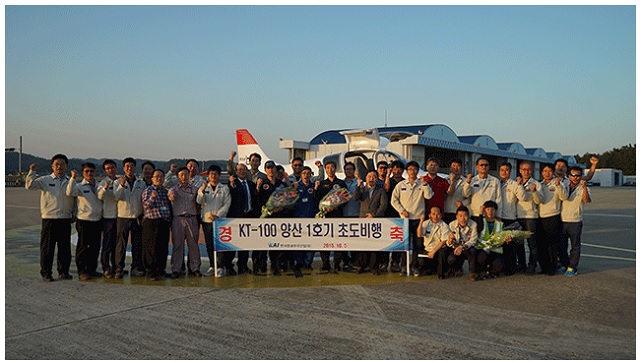 KAI says that using a complete system of indigenous platforms to train new pilots will reduce the number of training hours required by pilots by 35%, and reduce costs by 26%. At present, ab initio training is undertaken with the air force’s fleet of 20 Ilyushin T-103s.

KAI says the advent of the KT-100 will also open export opportunities.

“Via the KT-100 project, KAI can offer its training system to foreign countries as a package,” it says. “[In the case of South Korea], the package prevents South Korea from draining its foreign currency, and KAI can ensure high operation rates via quick flight maintenance support. This will reduce the time needed and cost for training pilots.”

The baseline four-seat KC-100 was first flown in July 2011. It is powered by a single Continental Motors TSIOF-550-K piston engine.