The ninth Airbus A330 Voyager from the UK’s Future Strategic Tanker Aircraft (FSTA) programme touched down at the Royal Air Force’s Brize Norton base in Oxfordshire on 29 May, completing the service’s “core” fleet of the type. 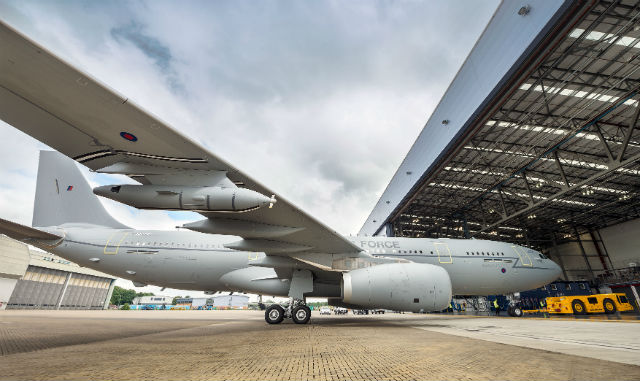 Eight converted Voyagers have now been delivered to Brize Norton for use by the service’s 10 and 101 squadrons, including five three-point tanker/transports and two equipped with under-wing pods only. The ninth – currently unmodified – example is operated by AirTanker and retained on the UK civil aircraft register. All of the aircraft are configured with a 291-seat, single-class passenger cabin, and are capable of carrying a maximum fuel load of 111t.

Since entering use, the UK’s Voyagers have been flown for a combined 9,750h, and have transported more than 172,000 passengers, AirTanker says. In the air-to-air refuelling role the fleet has completed over than 230 sorties and delivered in excess of 400t of fuel, supporting types including the RAF’s Eurofighter Typhoons and Panavia Tornado GR4s.

“We will continue to work in partnership with the RAF to refine this service,” says AirTanker chief executive Phill Blundell, who describes the completion of core fleet deliveries as “a sizable achievement".

In addition to supporting quick reaction alert activities with Typhoons in the UK and the Falkland Islands, the Voyager fleet is also currently supporting testing of the RAF’s future tactical transport. “ZZ334, a three-point tanker, has completed the military conversion programme and is currently in Spain as part of the UK’s commitment to support the [Airbus] A400M flight test programme,” AirTanker says.

A further five Voyagers will be delivered by the end of 2016. These will be available to support “surge” operations for the UK, but also made available for third-party use under the terms of the FSTA deal, which will run until 2035.