The two-man crew of a Bombardier Learjet 35A died when their aircraft was in collision with a German air force Eurofighter after a quick reaction alert training exercise went wrong, Germany’s BFU accident investigation board has concluded, in an interim report into the 23 June accident.

Operated by Germany’s GFD, Learjet D-CGFI was taking part in training with a pair of Eurofighters, the latter having taken off from Nörvenich air base.

The exercise scenario was for the aircraft to be out of communication with air traffic controllers, prompting a Eurofighter to intercept and fly alongside it to observe its pilots, before instructing them to follow it to land at Wunstorf air base.

After visually identifying the suspect aircraft, the pilot of the lead Eurofighter moved into a position to the left side of the Learjet at an altitude of around 8,000ft.

When the aircraft’s pilots had failed to follow instructions within 3min of a radio call the combat aircraft remained in position. Three minutes later, the exercise scenario developed, as the civilian crew reported that a hijacker had been overpowered, and that they were now able to follow the interceptor.

The Eurofighter pilot initiated a bank to the left to an angle of 27˚ shortly after this call. The pilot in command of the Learjet disengaged its autopilot and made a 5˚ bank to the right. This was followed by a 4˚ bank to the left, and engine power was increased to 88%. At this point, the cockpit voice recorder (CVR) reveals that he had lost visual contact with the escort, and handed control to his co-pilot, before bank angle increased to 13˚ to the left.

“Over the next 6s until the collision, the altitude, indicated airspeed and bank of the Eurofighter remained approximately constant,” the BFU says.

By contrast, the Learjet reached a maximum bank angle of 52˚. The CVR picked up the lead pilot saying “just take the computer”, before “muffled noises” were heard around 2s before the collision occurred. The Learjet came down near Olsberg-Elpe and both crew members were killed.

The Eurofighter involved in the collision was severely damaged. “The entire right engine of the aircraft was deformed in the direction of the aircraft longitudinal axis, and also had blue paint transfer on parts of the nozzle,” the report says. Its starboard under-wing external fuel tank was discovered in two parts, each more than 1nm (2km) away from the main wreckage of the Learjet, and insulation material from the latter’s fuselage was subsequently found attached on the end of a missile launch rail.

The Eurofighter pilot landed his aircraft safely after recovering to Nörvenich, despite having switched off its damaged starboard Eurojet EJ200 engine shortly before reaching the base. 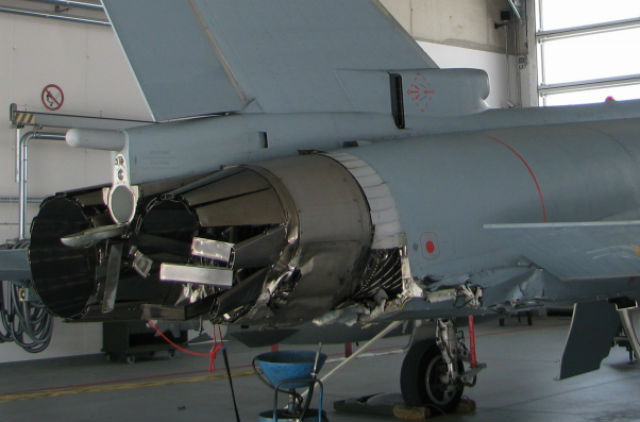