Airbus Defence & Space has highlighted the suitability of the A400M tactical transport as a humanitarian relief aircraft.

In a presentation at the LIMA show, representatives from Airbus and the International Federation of the Red Cross (IFRC) and Red Crescent Societies discussed the nature of airborne disaster relief missions, and the role air-lifted relief plays in disaster response.

The representatives also discussed their partnership with the Airbus Group Foundation, under which the airframer effectively donates free flights. These flights include providing capacity on the ferry flights of commercial and military aircraft from the company’s production locations in Europe. Such flights are frequently empty, and therefore provide an opportunity to move cargo of a humanitarian nature.

In addition, Airbus plays a coordination role in the event of a natural disaster, helping the Geneva-based Red Cross assess and gain access to airlift options. It also reaches out to customers to request airlift assistance.

One priority for the IFRC in the early days of a crisis is dispatching Emergency Response Units (ERU). An ERU is a standardised package of personnel and equipment that can be sent to a crisis zone. Self-sufficient for one month, ERUs support relief efforts in fields such as logistics, water treatment, sanitation, medical care, and other areas.

The IFRC says an A400M has the capacity to carry two full ERUs.

The presentation was made following the arrival of the Malaysian air force’s first A400M at the LIMA show on 17 March. 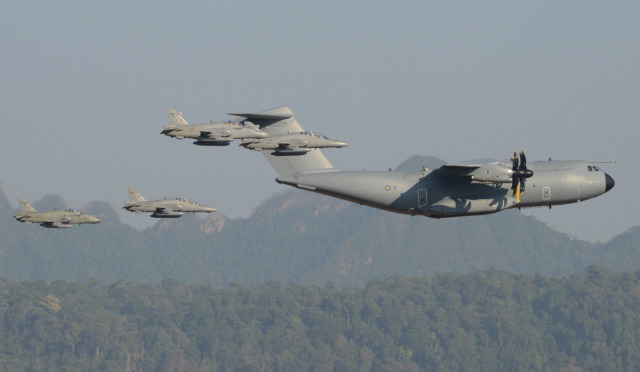 An Airbus representative says an A400M departing Kuala Lumpur would be able to carry 37t of cargo to the Philippines, southern China, or most of Indonesia. If the load is cut to 20t, the aircraft can fly as far west as the horn of Africa, reach most of Japan, or reach most of Australia. When it arrives at the location, it only needs 1,000-1500m of runway to land, and can turnaround in a runway width of just 27m.

Fundamental to the success of such a mission, however, is assessing the state of the runway before the landing. “You don’t want to land in a disaster area and become part of the problem,” says the representative.

Malaysia is due to receive the three remaining A400Ms it has on order between now and the end of 2016. Given the number of natural disasters that afflict Southeast Asia and the broader region, air forces are often called upon to airlift humanitarian supplies.