Lockheed Martin staged the first flight of an updated version of the T-50 trainer co-developed with Korean Aerospace Industries to compete for the US Air Force T-X contract on 2 June in Sacheon, South Korea, the company says.

The single-engined, two-seat trainer was modified for the T-X competition with a spine-mounted receptacle that is compatible with an USAF aerial refueling boom, glass cockpit displays, embedded training software and an open architecture mission system. 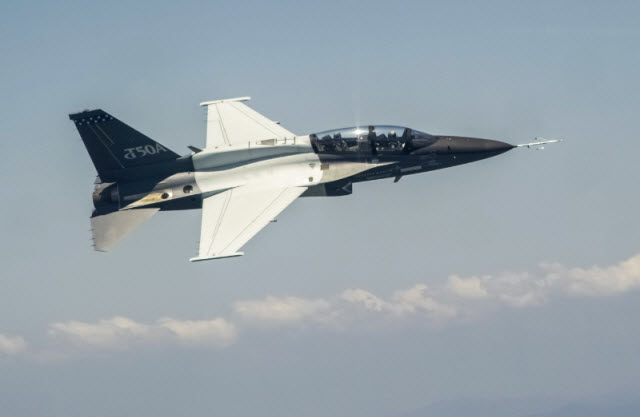 "I have no doubt this aircraft will close the gap which currently exists between the trainer fleet and fifth generation fighters" Ward says.

The USAF plans to replace hundreds of aging T-38 trainers under the T-X programme. The advanced jet trainer has helped develop the flying skills of thousands of USAF pilots since the early 1960s, but has struggled to meet the training needs of pilots entering single-seat, fifth-generation fighters. The USAF now uses the Lockheed F-16 as a stop-gap trainer for certain skills before pilots transition to the single-seat F-22 and F-35 fighters.

In December, Northrop executives told reporters that their clean-sheet design could fly in early 2016, but the latest issue of the company’s internal magazine says the first flight will come later this year.

Raytheon’s team is modifying an M-346 into a T-X-compliant T-100 trainer, which includes an aerial refueling receptacle. The Boeing/Saab team has not yet disclosed plans for flying or unveiling its clean-sheet candidate for the T-X contract.