Lockheed Martin is to ground-test key elements of a combined turbine-scramjet powerplant that could power an unmanned aircraft from a runway take-off to a hypersonic cruise to strike anywhere in the world from the USA within 2h.

The $10.2 million contract is for the Falcon Combined-Cycle Engine Technology (FaCET) portion of the US Defense Research Projects Agency’s (DARPA) Falcon programme to demonstrate technology for a reusable hypersonic cruise vehicle.

Under Falcon, Lockheed’s Skunk Works is already developing a series of unpowered hypersonic test vehicles that will be rocket-launched to demonstrate airframe aerodynamic and structural technologies for sustained Mach 10 cruise flight.

But the ultimate goal is to build a powered, reusable demonstrator that can take off from a runway on turbojet engines, transition to scramjets, cruise hypersonically for an extended period, then return to a runway landing.

Under the FaCET effort, Lockheed will ground-test elements of the inlet and scramjet flowpath envisaged for the Falcon hypersonic cruise vehicle, demonstrating performance and operability during mode transition from turbojet through dual-mode to scramjet power.

The inlet design is based on the “inward-turning” geometry to be flight tested for the first time later this year under the US/Australian HyCAUSE programme. This axisymmetric flowpath promises to be more efficient than the two-dimensional scramjets flown previously.

In Lockheed’s design, the inward-turning inlet provides air to a Rolls-Royce Liberty Works turbojet that will accelerate the vehicle to beyond Mach 4, then to a Pratt & Whitney Rocketdyne dual-mode ramjet/scramjet that will take over to power the vehicle to its Mach 10 cruise.

DARPA says FaCET ground tests will also demonstrate scramjet combustion performance, the common nozzle used by both the turbojet and the scramjet flowpaths, and jet effects on the aerodynamics of the waverider vehicle. 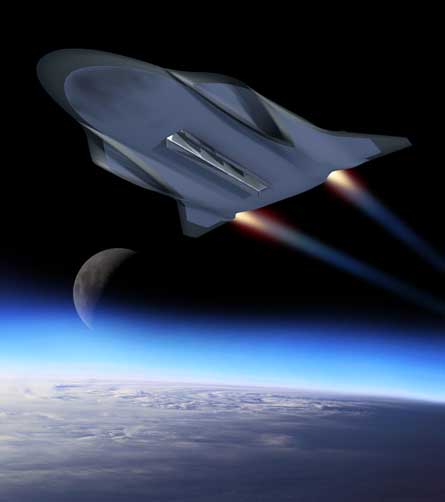