Lockheed Martin’s “flying wing” design for an unmanned carrier-launched aircraft has the “inherent” stealth the US Navy needs to operate in future high-threat environments, says the company during an interview with Flightglobal.

“Stealth is something that has to be designed into the [aircraft]. That’s one of the advantages that we believe we have,” says Bob Ruszkowski, Lockheed’s capture director for the navy’s unmanned carrier-launched airborne surveillance and strike (UCLASS) programme.

Ruszkowski says Lockheed has been stressing to the navy the importance of getting the initial design “right”, saying improvements in capability may not be viable if the service doesn’t “start out with the right shape of the aircraft.”

Lockheed, Boeing, General Atomics Aeronautical Systems and Northrop Grumman are in the running for a UCLASS contract to develop a stealthy UAV that operates from USN ships.

General Atomics told Flightglobal earlier this month that it is making progress on its design, which will draw from technology used in its Predator C Avenger. 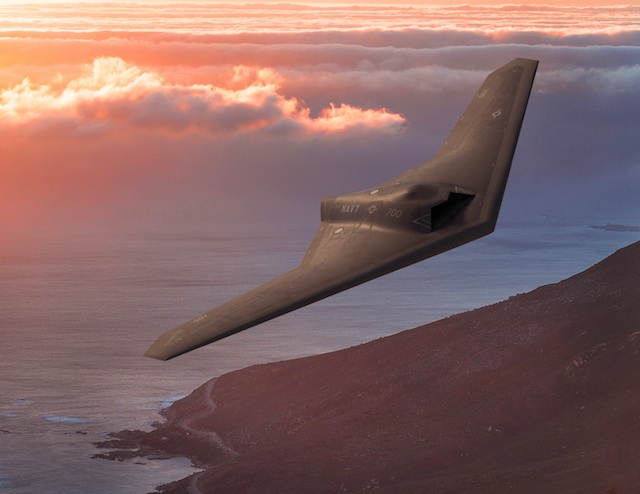 Ruszkowski says Lockheed’s design (company rendering pictured above) will draw from the stealth and computer technology the company developed for its RQ-170 stealth UAV and its F-35C Joint Strike Fighter.

“It’s a flying wing configuration and inherently stealthy with good endurance characteristics,” he says. “You need to have inherent, broad-band stealth characteristics to ensure you can have persistent intelligence, surveillance and reconnaissance to be effective in future scenarios.”

Ruszkowski adds that Lockheed’s aircraft will also have an open systems architecture, that will make integrating new technology easier. And the flying wing design requires less complex manufacturing and tooling, he says.

The UCLASS programme moved forward earlier this month, when the navy released a draft request for proposals (RFP). A final RFP is expected later this year, and the service has projected first flight in the third quarter of fiscal year 2018, according to budget documents.

The draft RFP is not publicly available, and Ruszkowski declines to discuss its details. However, he says it calls for the development of a strike and reconnaissance aircraft that will gain additional capabilities over time. Those additional capabilities, he says, include the ability for the aircraft to be refuelled aerially, and to act as a tanker, providing fuel to other aircraft, like fighters.