Marenco Swisshelicopter maintains it is on track to achieve EASA certification for its developmental SKYe SH09 light-single within 12-16 months after the type’s maiden sortie on 2 October.

Although he acknowledges the limited amount of time spent airborne provided few clues about the helicopter’s handling characteristics, it did generate “lots of telemetry data” on the airframe’s reaction to the stresses involved.

Additionally, Senes praises the performance of the SKYe’s Honeywell HTS900 engine and the moderate level of cockpit noise generated by both the powerplant and the five-blade composite main rotor.

“That was without the engine cowling too. It will kill down the engine noise when that is fitted,” says Senes.

Subsequent test flights are scheduled for “the coming weeks” once the data has been analysed, he says. 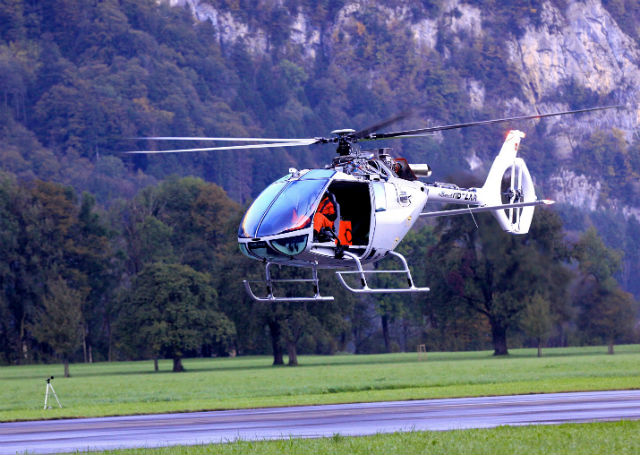 Three prototypes of the 2.5t-class helicopter will be used for the certification effort, with the second due to roll out in the first half of 2015, and the third – which will be closer to the final production configuration – arriving around two months later.

Marenco is pitching the SKYe at the utility and passenger transport market, and, outside Europe, the medical evacuation segment.

It hopes to take on “outdated” single-engined models such as the Airbus Helicopters EC130 T2 and Bell Helicopter 407GX, which are both in the SKYe’s $3.5 million price bracket.

Senes says that it is attempting to bring the cabin volume of medium-twins to the market for single-engined helicopters. Other advances include a monocoque carbonfibre fuselage and tail boom, and a 1.2m diameter shrouded tail rotor.

“We cannot fight them on price,” he says. “We have to fight on what we offer on the aircraft – its performance and the maintenance of it.”

Production is targeted to eventually reach 80-100 helicopters per year, with the company’s backlog presently numbering 59 units.