Russia has conducted the first flight of a Kamov Ka-52K attack helicopter, with the amphibious type reported as having made a 40min debut on 7 March.

Adapted from the Ka-52 “Alligator” for deployment aboard the Russian navy’s future Mistral-class amphibious assault ships – two of which are being acquired from France – the new variant features folding rotors and folding stub wings.

Flightglobal’s Ascend Fleets database records the Russian navy as having signed a firm order for four Ka-52Ks, with options to increase this by a further 28 aircraft. The programme has been subject to delays, however, with a first flight target initially having been set for mid-2013.

Paris late last year halted the planned delivery of the service’s lead ship, the Vladivostok, due to Moscow’s part in stoking unrest in eastern Ukraine.

The Russian air force has a current fleet of 63 Ka-52s, with confirmed orders for another 93, says Ascend.

Earlier trials of the Ka-52 have been carried out aboard a surface vessel (below), in support of the K-model's development. 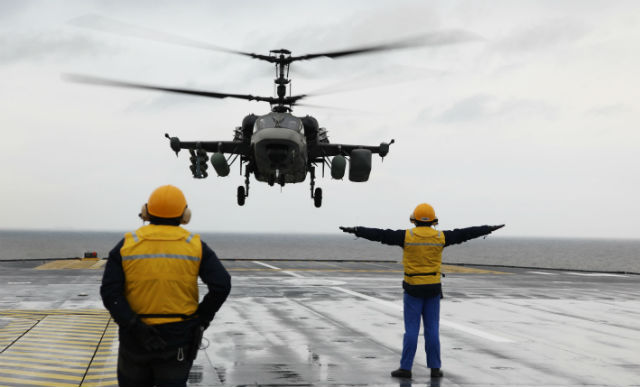