If the Middle East’s business aviation market has peaked, nobody appears to have told the region’s two big charter players. Both Qatar Executive and Abu Dhabi’s Royal Jet have been investing heavily in metal. Royal Jet – the world’s biggest Boeing Business Jets operator – has just put into service its seventh new 737-based BBJ. Its “twin” – also configured with 34-seats – was due to take Royal Jet’s BBJ fleet to eight at the end of November.

Meanwhile, in March this year Doha-based Qatar Executive took delivery of its third Gulfstream G650ER – it has three more of the ultra-long-range flagship on order, together with up to 24 G500s and G600s. The commitment – firmed up and extended at last year’s EBACE business aviation show in Geneva – should by the early 2020s make the offshoot of the national airline the region’s biggest charter operator.

The Middle Eastern charter market remains a relatively young phenomenon. It did not exist before the emergence of Royal Jet from 2003. Royal Jet was then joined by several other high-profile brands and a number of third-party management companies offering charter services. While Qatar Executive entered the fray in 2009, subsequent years saw the demise of a number of players, including Abu Dhabi’s Prestige Jet and Rizon Jet of Qatar, as well as several smaller entrants.

As with many markets, eager entrepreneurs followed the pioneers, but only a handful have had the financial backing or robust business model to survive upsets such as the 2009 Dubai debt crisis or the current low oil price. “A lot of people were sold a dream that was far from reality,” says Paras Dhamecha, executive director of Empire Aviation Group, a Dubai-based aircraft management company that has continued to thrive.

Royal Jet is planning to have at least one and perhaps both of its new BBJs at the MEBAA show after the aircraft were returned from outfitting at Lufthansa Technik in Hamburg. According to Rob DiCastri, Royal Jet’s new chief executive, the airliner-derived jets will “generate new markets” with a constituency of business travellers who want to fly on the latest product. The 32-seat layout “also plays very well in this market,” he says.

So where does that leave the operator’s six other BBJs, the oldest of which is 17 years old? Although two of its earliest examples are for sale, DiCastri maintains that Royal Jet is in no hurry to offload. “The aircraft are still popular and in reasonable shape. We’ve done soft refurbishments on them,” he says. “In years past, we might have struggled with aircraft that age, but the current market is more accepting to fly on aircraft that are a bit older for a bit less money.”

Of its six older BBJs, DiCastri says its two 37-seaters are among the most popular, with the front bedroom appealing to VVIPs travelling with an entourage. Royal Jet also offers a 19-seater, a typical BBJ configuration but less popular in the Gulf, he says. A 30-seater, with rear bedroom, together with a 46-seater and 52-seater make up its fleet. In addition, it operates two Bombardier Challenger 500s in what DiCastri describes as a “very competitive area of the market in the Middle East”.

Royal Jet also has two Bombardier Learjet 60s and a Gulfstream G300, used mainly for medevac, but DiCastri is uneasy about that market. “It’s a business that is even more unpredictable than the BBJs,” he says. “If you don’t get a high utilisation level, they don’t pay for themselves.” Instead, Royal Jet is considering taking back the three medically configured aircraft on a management contract and plans to go on offering medevac services using the BBJs and by sub-chartering other aircraft.

Breaking into North America remains an ambition for Royal Jet. Its BBJs generally cannot reach the east coast from the Gulf without a stop. However, DiCastri is cautious about ordering ultra-long-range aircraft, preferring instead to contract from a third party through its brokerage arm if a client needs such a service. “Would we like to have access to an aircraft with that capability? Yes,” he says. “But by doing it this way we can test the market, to see what sort of demand is out there.” 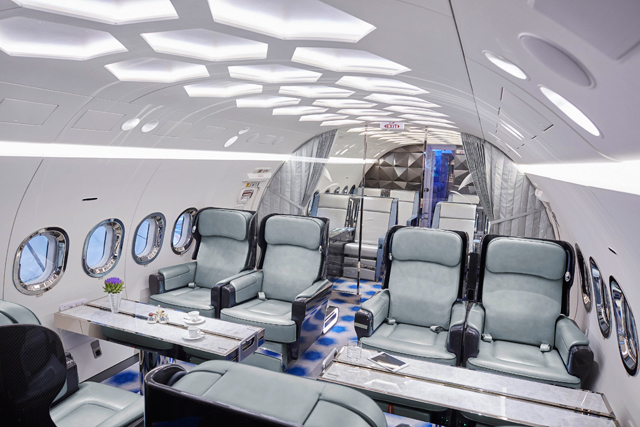 Royal Jet's newest BBJs, just back from the outfitters, take the Boeing fleet to eight

One option for Royal Jet, he says, is to take on an aircraft on a management contract, or purchase one on the used market. “Generally we would look to be getting 50 to 60 hours a month to justify us owning an aircraft,” he says. “But there are a lot of low-price [used] aircraft and great deals out there, so maybe we could break even at 40 to 50 hours. There are potentially many aircraft types that could complement our fleet.”

Qatar Executive has seen phenomenal growth since its launch seven years ago, and its latest G650ER order will make it the largest operator in the world of the Gulfstream flagship. The company’s switch of loyalties to the US manufacturer has seen it phase out its Bombardier fleet of four Global 5000s and an XRS, although it has held on to a 40-seat Airbus ACJ319 and three Bombardier Challenger 605s which are configured for medevac.

Abu Dhabi-based Al Jaber Aviation, or AJA, has had to rein in earlier ambitions for a fleet of more than 20 jets. When the company launched in 2009, it set out what chief operating officer Mark Pierotti described as an “aggressive delivery plan” to be operating by the end of this decade six ACJs and 15 Embraer corporate jets, ranging from the Lineage 1000 to the Legacy 450. Its fleet currently comprises an ACJ318, a Lineage 1000 and a Hawker 800.

Speaking today, Pierotti calls the business aviation environment in the Gulf “the most challenging in 10 years”. He adds: “The Russian market was hit two or three years ago and now the oil price means the whole region is being careful.” AJA has instead looked to diversify into lower-cost air taxis (see box) and maintenance. Pierotti also says the business is “actively looking” for a “partner which shares our vision, an investor or a merger in which one and one might make three”.

AJA’s neighbour at Al Bateen, Falcon Aviation Services, has a fixed-wing charter fleet with an Embraer Lineage 1000, two Legacy 600s and a Gulfstream G450. However, its core business remains helicopter shuttles, with a fleet of 20 Airbus, Bell and Leonardo aircraft focused on transporting crews to Abu Dhabi’s offshore oil rigs. Two Bombardier Q400s are also deployed for shuttles to oil and gas installations on islands off the Abu Dhabi coast.

It is a business that has been under some pressure due to the low oil prices of the past two years, says its chief operating officer, Capt Raman Oberoi, and Falcon has had to restructure the terms of some of its contracts. “We are all part of the same process. We work as a team with the oil companies,” he notes. However, he maintains that after some decline over the summer, “we are back to the numbers we were having a year back”.

In parallel with the dedicated charter business, the UAE is home to a number of management firms, operating private aircraft on behalf of private owners on a local air operator’s certificate, and occasionally offering them – if authorised by the regulators – for third-party charter. International players with a local presence in the management market include the UK’s Gama, ExecuJet and Jet Aviation of Switzerland, and the co-owned Dubai-based operation of Germany’s DC Aviation.

However, one of the most successful local players is Empire Aviation, based at Dubai International Airport’s free zone. The private company, which celebrates its tenth anniversary next year, has grown its fleet to 23 aircraft with separate registers in the UAE and San Marino. Eight of those aircraft are available for charter. Empire is also on “final approach” to setting up a third AoC, this time in India, says Dhamecha.

“The management business has been good, a mainstay for us,” says Dhamecha, who admits that the past few years have seen a reduction in the fleet of privately owned aircraft in the region. “A lot of guys fell away after 2009,” he says. “They didn’t have the global footprint they thought they would. But others have matured and upgraded their aircraft and some are on their third or fourth aircraft with us.”

While the UAE authorities prefer aircraft on a local AoC to be based in the country, setting up the San Marino operation allowed Empire to cast its net wider, securing aircraft based in Nigeria, mainland China and Hong Kong. Unlike a European Aviation Safety Agency AoC, San Marino also does not require majority local ownership of the business, so Empire is able to wholly control its subsidiary in the tiny landlocked European republic, which sits outside EASA jurisdiction.

That is not to say a San Marino AoC is a “flag of convenience”, insists Dhamecha. The territory – scarcely bigger than a large Italian commune and without its own airport – has “pulled in expertise and best practice from around the world” to create a rigorous, but “commercially minded” private aircraft regulatory authority, he says. “The great thing about them is that they always answer the phone. They pull out the stops to get things done.”

Dubai-based DC Aviation Al Futtaim – which opened the first fixed-base operation and maintenance hangar at Dubai’s Al Maktoum airport in 2013, has just added aircraft management to its portfolio of services, and has a Bombardier Global XRS, Challenger 604, Gulfstream G200 and Dassault Falcon 7X on its books. However, the owners of all these aircraft have opted not to make them available for charter, says general manager Holger Ostheimer.

However, Gama Aviation – based in Sharjah next to Dubai – is making a push into charter. It has just added two Learjet 60s and a Piaggio Avanti Evo to its locally managed fleet of eight aircraft, one of which – an Embraer Legacy 600 – is also available for third-party use. General manager Martin Ringrose is upbeat about prospects. “Charter activity has been static for two years, but we’ve seen it begin to move in the past six months in terms of movements at least,” he says.

The latest aircraft – all of which can be configured as air ambulances – will be among the smallest charter aircraft in the region, “fitting neatly into a category and price point where there is currently low inventory and availability”, says Gama. It remains to be seen whether the availability of such types – available for a fraction of the hourly rate of a Gulfstream or Challenger – will tempt business aircraft users in the Middle East into more compact cabins.

Andrew Summers, managing director of Dubai-based Air Charter Service Middle East, part of a large brokerage firm, believes it just might. “The only thing stopping the smaller aircraft is a lack of them in this region,” he says. “If operators had more, clients would become aware of them. If you are flying from Dubai to Doha, why take a Gulfstream when you could take a [Cessna Citation] XLS or a Mustang?”