MBDA has been awarded a £41 million ($52.6 million) contract to begin preparing its Meteor beyond-visual-range air-to-air missile for integration with Lockheed Martin's F-35B for the UK.

The European company – which will perform the activity at its Stevenage facility in Hertfordshire, England – says its funding allocation includes "test assets, productionisation and engineering work needed to support Meteor's compatibility and use from F-35". 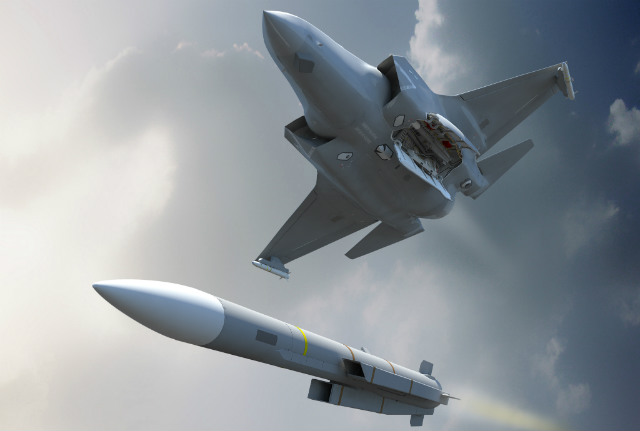 Under the terms of its risk-reduction contract, MBDA says it will also begin developing "role change kits for the UK's common Meteor stockpile for both the [Eurofighter] Typhoon and Lightning II". The long-range weapon will require adaptation for carriage within the F-35B's internal weapons bays.

Already carried by some of the Swedish air force's Saab Gripens and also being integrated with the Dassault Rafale, Meteor will enter UK service with the Royal Air Force's Typhoons in 2018, and aboard its short take-off and vertical landing F-35Bs from 2024, the Ministry of Defence says.

The missile's full integration with the F-35B will occur during the jet's Block 4 software update, with MBDA also to promote the ramjet-powered weapon for operators of the conventional take-off and landing F-35A.

MBDA is already adding its short-range ASRAAM for the UK's aircraft during the Joint Strike Fighter programme's Block 3 software standard, with initial test firings of the missile conducted in the USA earlier this year.