Australian searchers are cautiously confident that they have located the possible resting site of MH370, as the ADV Ocean Shield was able to reacquire ‘pings’ consistent with transmissions from a flight data or cockpit voice recorder.

In a press briefing, Australia’s Joint Agency Coordination Centre (JACC) head Angus Houston said that he is optimistic about the potential lead in the mystery of the missing Malaysia Airlines Boeing 777-200ER.

The Ocean Shield, using a towed ‘pinger locator’ on loan from the US Navy, detected a signal at frequency 37.5Khz twice on 5 April, and was able to reacquire it twice on 8 April, says Houston. The ship is located west of the Australian town of Learmonth, in the Indian Ocean.

Houston says the transmissions were somewhat weaker on 8 April than previously, and that this is consistent with the approximately one-month battery life of the recorders’ pingers.

An Australian Maritime Safety Authority image shows that the ‘ping’ locations are consistent with calculations about the aircraft’s likely flight path based on Doppler-shift analysis of routine log-in messages transmitted by a satellite ground station, to which the flight replied before, presumably, crashing into the sea. Six complete signals were received, as a well as a seventh partial signal. 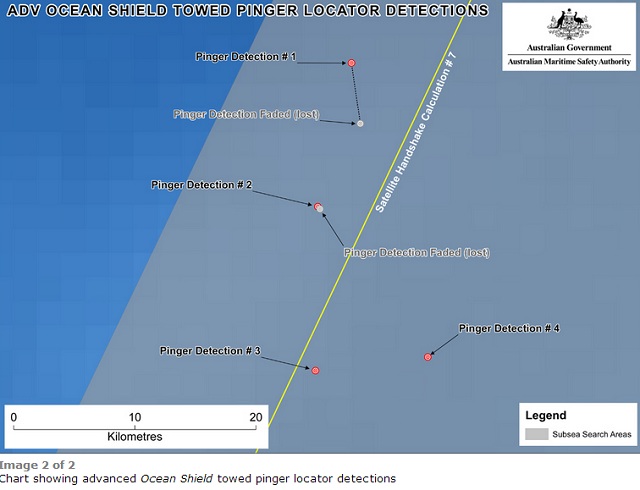 To assist the search, a Royal Australian Air Force Lockheed Martin AP-3C Orion will be deployed to the Ocean Shield’s location, where it will deploy up to 84 sonobuoys. To be dropped from the aircraft in a special pattern, these will lower hydrophones 1,000ft below the surface to listen for transmissions. Houston says air force technicians have optimised the listening equipment aboard the aircraft to isolate 37.5Khz transmissions.

The search is focused on waters about 4,500m deep, says Houston. The seabed in the area is very silty, which can impede radio transmissions.

For the time being, no further ships are being sent to the area. This is to maintain a sanitary acoustic environment for the Ocean Shield and the planned sonobuoy field.

Houston came across as optimistic, but warned that the location of the aircraft cannot be ascertained until physical debris traceable to the aircraft is photographed or recovered.

He adds that another ship involved in the search, the Chinese vessel Hai Xun, has detected no further transmissions on 37.5kHz, after it detected two transmissions on the frequency on 5 April. The Hai Xun is located about 600km southwest of Ocean Shield.

Flight MH370 disappeared on 8 March with 227 passengers and 12 crew aboard while operating the Kuala Lumpur-Beijing route.