On Saturday, China’s official Xinhua news agency created a stir in international media when it disclosed that the frequency of the signal received by Hai Xun was 37.5kHz per second, which is consistent with the transmission of the locator beacon used on flight data and cockpit voice recorders.

It is far from clear whether either signal is related to the lost Boeing 777-200ER aircraft, which vanished while operating the Kuala Lumpur-Beijing route on Saturday 8 March. From the early days of the aircraft’s disappearance, bad leads have plagued the search. These have ranged from irrelevant satellite images of debris floating in the sea to objects spotted by aircraft that later proved to be unrelated. 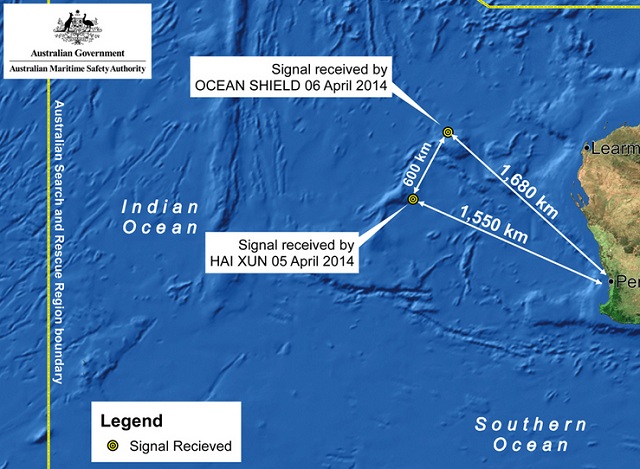 What is more, it took nearly two weeks for searchers to zero in on the southern Indian ocean as the aircraft’s most likely crash area.

The batteries of the aircraft’s beacons, which are presumed to be lying on the ocean floor in the Indian Ocean west of Australia, are likely to fail after approximately one month of signalling.

“The Australian Transport Safety Bureau continues to refine the area where the aircraft entered the water based on continuing ground-breaking and multi-disciplinary technical analysis of satellite communication and aircraft performance, passed from the international air crash investigative team comprising analysts from Malaysia, the United States, the UK, China and Australia,” adds JACC.

Malaysia, meanwhile, remains committed to finding the aircraft, which carried 227 passengers and 12 crew.

In a briefing on Saturday 5 April, minister of defence and acting transport minister Hishammuddin Hussein said the search will continue with “the same level of vigour and intensity.”

The team will have three groups. The airworthiness group will look at issues related directly to the aircraft, such as maintenance records, structures, and systems. An operations group will examine issues such as flight recorders (presuming these are ever located), and a medical/human factors group will look at psychological and physiological factors.

Other countries formally involved in the investigation are the USA, China, UK, France, and China.