BAE Systems and the US Department of Defense (DoD) have performed a successful manned unmanned teaming (MUM-T) demonstration with a fighter and unmanned air vehicles (UAVs).

The test, which took place on a DoD range, saw the UAVs execute a simulated combat mission alongside a combat aircraft, says BAE. 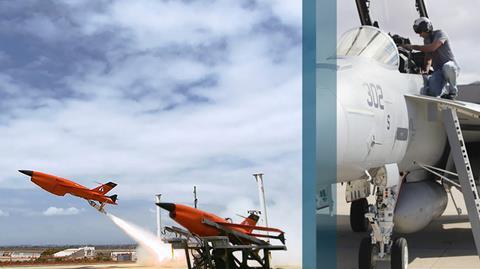 The BAE/DoD work involved a fighter aircraft teaming with UAVs

Working together, the UAVs – equipped with real mission sensors – were able to autonomously execute the tactics required to complete the mission, while the fighter pilot monitored progress and used a human machine interface (HMI) to interact with the UAVs as necessary.

“The development of autonomous technology is crucial to protect our warfighters against emerging threats,” says Ehtisham Siddiqui, vice-president and general manager of Controls and Avionics Solutions at BAE.

“This flight test demonstrates our team’s commitment to accelerate the deployment of reliable and innovative manned-unmanned teaming solutions for mission success.”

The company adds that the technology involved allows new payloads to rapidly enter fleet use, helping effectiveness against adversaries. In addition, its MUM-T algorithms can be adapted for new missions and technologies, with third parties able to provide customisation via a software kit.

MUM-T is seen as a promising technology that allows manned assets to work with UAVs to execute complex, dangerous missions in contested airspace.