The tests took place on 20 November at an air base in Turkey’s northwest, says the company. 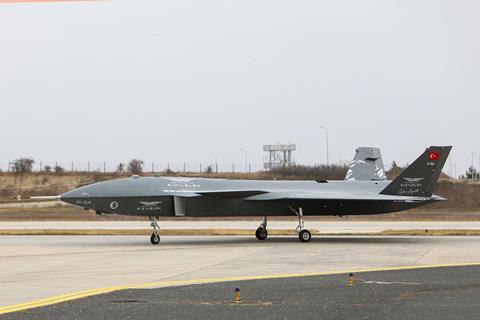 During the test the aircraft conducted an “autonomous taxi and take-off roll test”, says Baykar.

The aircraft is powered by a Ukrainian Ivchenko-Progress AI-322F turbofan. The Kizilelma’s maximum take-off weight is 5,500kg (12,100lb) and it will be able to carry a 1.5t payload.

Baykar foresees the Kizilelma conducting several missions, including the suppression and destruction of enemy air defences. It is also intended to accompany manned aircraft, fulfilling a ‘loyal wingman’ role.

The Kizilelma bears a passing resemblance to the Chengdu J-20 fighter, with prominent canards, cropped delta wings, and a canted twin tail. Under the fuselage it features an EOTS (electro-optical targeting system) housing.

Baykar did not state when the first flight of the Kizilelma will take place.

The aircraft joins a growing list of proposed or developmental loyal wingman UCAVs.

The most prominent example is Boeing’s MQ-28A Ghost Bat, which has been undergoing testing in Australia. Media reports have suggested the Ghost Bat – which Boeing Australia developed with the Royal Australian Air Force – is also being tested by the US Air Force.

At the recent Airshow China in Zhuhai, China Aerospace Science and Technology Corporation displayed a model of a loyal wingman aircraft designated FH-97A.

As with the Kizilelma and MQ-28A, the FH-97A is also envisaged as collaborating with manned aircraft on combat missions.