The export of medium altitude, long endurance (MALE) UAVs has been a distinct bright spot in China's efforts to join the ranks of the world's leading defence aerospace exporters. According to figures from the Stockholm International Peace Research Institute (SIPRI), which tracks global arms flows, China exported 163 large, weapons-capable UAVs to 13 countries from 2008 to 2018.

By comparison, SIPRI data suggests that USA manufacturer General Atomics delivered just 15 MQ-9 Reaper systems to international customers in the past 10 years, with outstanding international orders for 28 additional examples. UAV giant Israel has exported about 167 MALE UAVs of the Hermes and Heron series during the same period, with these assets serving in the intelligence, surveillance and reconnaissance (ISR) missions – not attack roles. 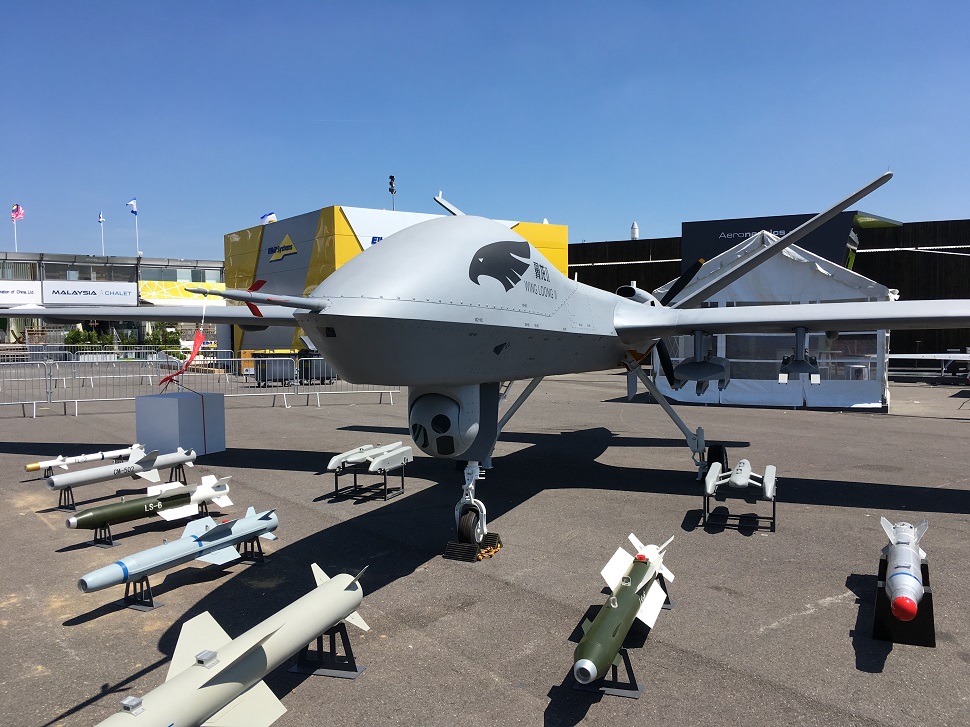 In recent years, China National Aero-Technology Import & Export Corporation (CATIC) has had a prominent presence at major international air shows, including static displays of mock-ups of the AVIC Wing Loong I and Wing Loong II UAVs. The Wing Loong family has long been a staple at the biennial Air Show China in Zhuhai. The type regularly appears surrounded by an array of bombs and guided missiles. In addition, China has enjoyed success selling the China Aerospace Science and Technology Corporation (CASC) Cai Hong ("Rainbow") series of UAVs, which includes the Cai Hong 3 (CH-3) and larger CH-4.

Siemon Wezeman, senior researcher at SIPRI, says China has enjoyed "amazing" progress in the Middle East and African UAV markets in recent years. "Over the years they've gotten to know the market better, and are much slicker now."

In addition to provoking the ire of western UAV manufacturers, Beijing's efforts in the export space have attracted the attention of the Pentagon. It mentioned the UAV exports in its recent annual report to congress about Chinese military developments.

SIPRI data indicates that the most prolific Chinese MALE UAV export is the type apparently shot down in Yemen, the Wing Loong I, with 62 examples. Major customers include the United Arab Emirates, Saudi Arabia, and Egypt. An AVIC flyer distributed at Zhuhai in 2018 indicates that the system has an endurance of 20h and a maximum payload capacity of 200kg (440lb), sufficient for a single missile under each wing.

The system only needs 1,000m (3,280ft) to take off and 600m for landing. Take-off and landing are both conducted automatically, and the aircraft boasts an encrypted data link. In addition, it is capable of electronic intelligence and jamming. 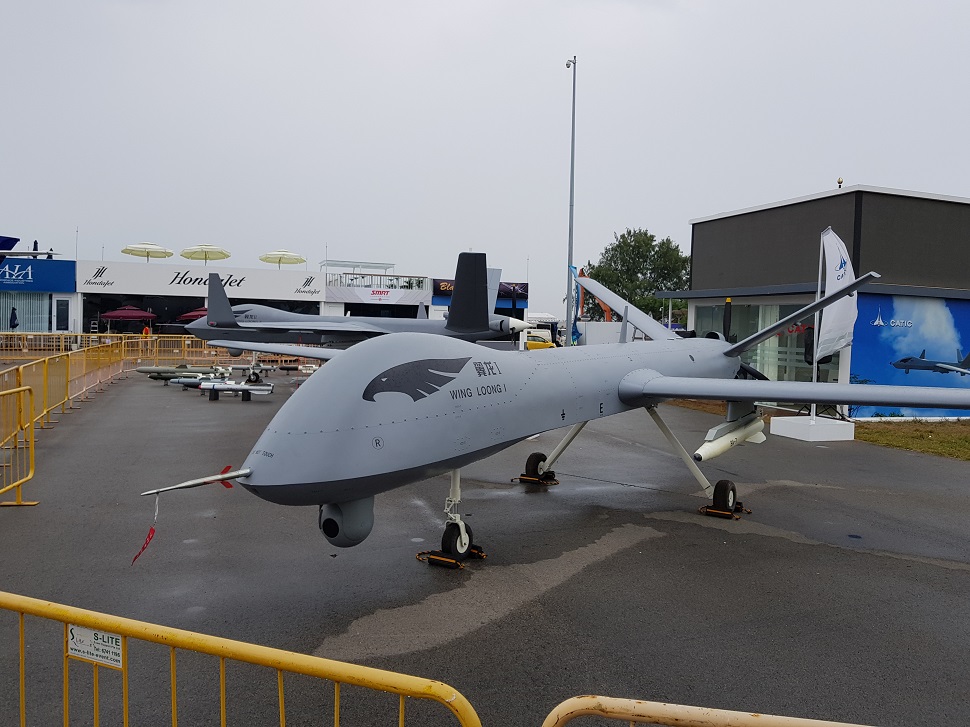 The Wing Loong II, of which Beijing has sold 15 to Saudi Arabia, 15 to Turkmenistan, and an unspecified number to Egypt, is far more capable. Whereas the Wing Loong I has a maximum take-off weight (MTOW) of 1,200kg, the Wing Loong II's MTOW is 4,200kg. As with its smaller sibling, it includes a ground control station and integrated logistics system. It has three hardpoints on each wing. An AVIC flyer for the type shows it carrying 10 air-to-ground munitions, with four mounted on dual racks. Sensor payloads include an electro-optical (EO) surveillance/targeting system and a synthetic aperture radar.

AVIC has also developed another variant of the family, the Wing Loong ID, an upgraded version of the Wing Loong I that is specifically designed for the export market. The system had its maiden flight on 23 December 2018. The aircraft is entirely made of composites and its basic payload is an EO pod and a synthetic aperture radar. It has four hardpoints that can accommodate 10 types of missiles or bombs. It has a more powerful engine than the Wing Loong I, its MTOW is 300kg higher, at 1,500kg, and it can carry an external payload of 400kg.

In addition, SIPRI shows that 44 CH-3s have been sold to users such as Algeria, Myanmar, Nigeria, Pakistan and Turkmenistan. Twenty CH-4s have been delivered to Algeria, Iraq, Jordan and Saudi Arabia. In addition, in 2017, Riyadh entered an agreement to produce CH-4s locally as it seeks to develop its aerospace sector.

The MALE UAV segment represents a notable area where China has made inroads with defence buyers that are typically strong customers of US and European defence equipment. Owing to the vagaries of the MTCR, selling assets such as the MQ-9 Reaper to countries such as Egypt, Saudi Arabia and the United Arab Emirates has been off limits. This is despite the large numbers of advanced US combat jets, attack helicopters and smart weapons found in the air forces of these countries. This has allowed Chinese UAV manufacturers to seize significant market share in one of the defence industry's frontier market segments.

"Chinese manufacturers appear to have spotted a gap in the market as a result of US restrictions on the sale of armed UAVs and have used this as a route to market," says Douglas Barrie, senior fellow for Military Aerospace with International Institute for Strategic Studies in London. 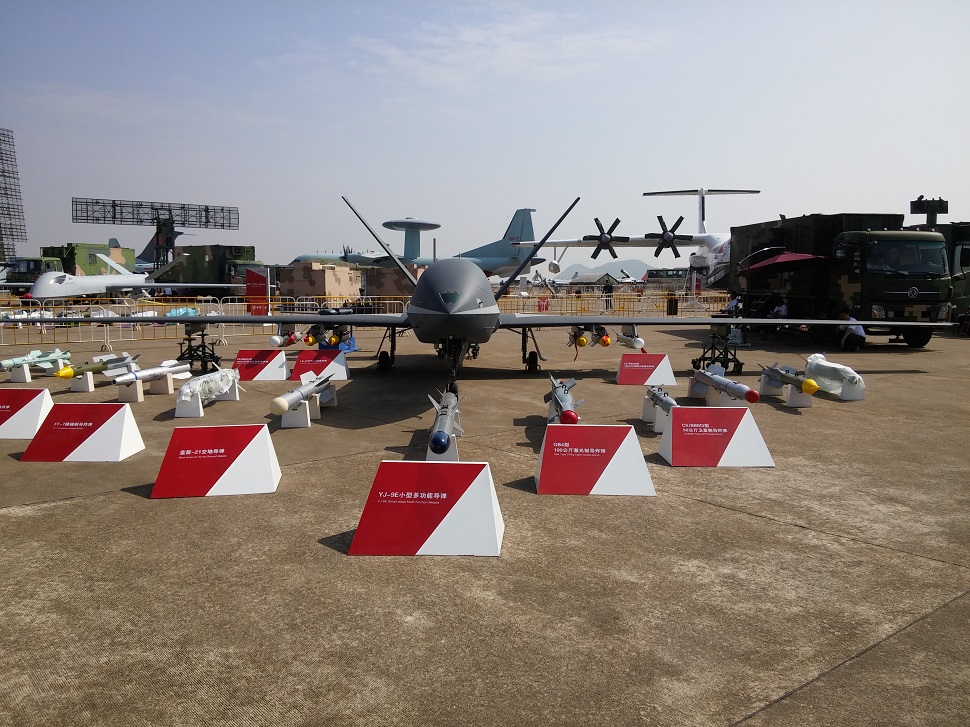 "Beijing has made sales in the Middle East to countries that have traditionally more often bought US systems. In terms of advantages the most obvious is the ability to acquire an armed UAV, with China offering a range of air-to-surface munitions and missiles either already integrated or capable of being integrated. The systems are also likely price competitive. Disadvantages likely cover a less capable overall performance, and possible training and support deficiencies."

Another advantage that Chinese systems offer as opposed to western systems is that Beijing is less selective with its clientele.

Despite strong sales, however, there are questions about the quality of Chinese systems. One area of weakness lies in turboprop engines – engines are a persistent problem with Chinese-produced aircraft. This shows up in performance. The MQ-9B Reaper, for example, has published service ceiling of 49,000ft, while that for the Wing Loong II is 29,500ft. The Reaper is also faster, with a top speed of 260kt (480km/h), compared with 199kt for the Chinese aircraft.

China is also working its way up the technology ladder. AVIC promoted its turbojet-powered Cloud Shadow strike/reconnaissance UAV at the 2017 Dubai air show, where it displayed a mock-up of the type. In the armed role, the Cloud Shadow can carry up to 400kg of munitions on four or six hardpoints, while it can also be configured with a range of EO sensors and used in search and rescue. Its endurance is up to 4h and it has an operating altitude of 41,000ft.

"China, in particular, has become an increasingly influential player, taking advantage of that hole in the market," says a Royal United Services Institute paper on UAV exports to the Middle East.

"Some within China believe that by implementing a selective export policy on drones, the US was trying to maintain its dominant and exclusive role in the field. Instead, by capitalising on the gap created in the market, over the past few years, Beijing has supplied armed drones to several countries that are not authorised to purchase them from the US, and at a dramatically cheaper price."