China’s Tengden TB-001 unmanned air vehicle (UAV) may have a role in guiding Chinese ballistic missiles to their targets, and for providing real-time battle damage assessment.

These potential combat roles for the TB-001 – a large twin-engined UAV known as the ‘twin-tailed scorpion’ — was outlined in a paper by Japan Air Self-Defense Force Lieutenant Colonel Aita Moriki. Derek Solen of the China Aerospace Studies Institute translated Moriki’s paper into English. 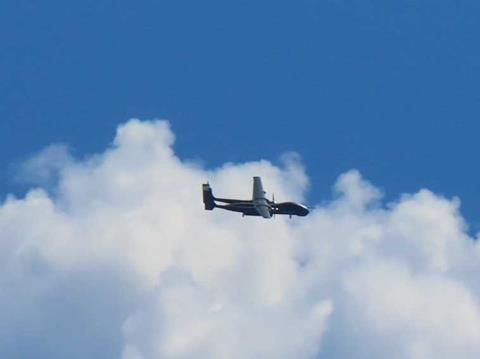 A Chinese TB-001 spotted by Japanese forces in August 2022

Moriki’s report observes that the TB-001 and other Chinese UAVs were active over the waters east of Taiwan on 4 August 2022, when the People’s Liberation Army conducted a major exercise involving aircraft, missiles, and ships.

Beijing’s exercises, which disrupted commercial air and sea traffic, were intended to vent Beijing’s displeasure following a visit to Taiwan by then US House Speaker Nancy Pelosi.

On 4 August, the TB-001 was present in international airspace over the Western Pacific that Beijing had restricted for a military exercise.

Moriki hypothesises that the TB-001, which is equipped with an electro-optical/infrared (EO/IR) sensor, may have conveyed real-time footage of Chinese ballistic missiles – probably the medium-range DF-15B – striking simulated targets.

Ballistic missiles are likely to form a key element of any Chinese effort to defeat Western forces – namely the US Navy – coming to Taiwan’s aid in a crisis. Beijing is known to have developed anti-ship ballistic missiles that can target high-value US ships, including aircraft carriers.

In addition, the TB-001 transmitted real-time video footage in September 2022 following an earthquake in Sichuan Province. The type was also used to set up a communications network to support search and rescue efforts.

“Therefore, it can be thought that the TB-001 UAV circling off eastern Taiwan on August 4 was transmitting to headquarters real-time video of the impacts by missiles that the Rocket Force launched,” writes Moriki.

Moriki goes on to theorise that the TB-001 may also have provided terminal guidance to DF-15Bs as they entered the target area. Quoting Jane’s, he states the DF-15B and similar Chinese missiles must constantly receive updated targeting information from over-the-horizon radars, UAVs, submarines, and satellites. He also mentions PLA writings that highlight the importance of UAVs in attacking time sensitive targets.

The TB-001, also designated the TW328, has made several appearances during China’s regular intrusions into Taiwan’s Air Defense Zone. In addition to an EO/IR sensor, it is capable of carrying several missiles and other payloads.