Kratos lists 17 distinct UAS capabilities it has validated since 2015, including a range of autonomous flight profiles, collaborative operations with other aircraft and UAS, as well as the carriage and deployment of weapons. 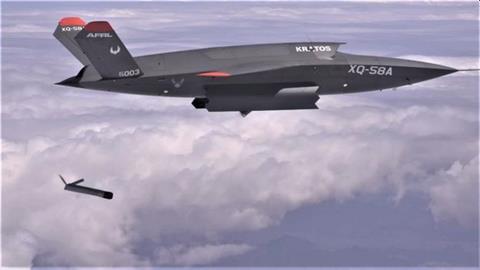 The company highlights that its aircraft are runway independent, allowing them to operate in high threat scenarios. It touts its range of UAVs as being able to provide both mass and affordability, as well as survivability through signature, speed, and manoeuvrability.

“The [US Department of Defense] has reported consistently, especially in the last several months, that runway independence and the ability to operate from multiple non-large base locations is a critical enabler for our military’s successful operations in the most critical enemy threat scenarios,” says Steve Fendly, president of Kratos Unmanned Systems Division.

“The DoD has also reported consistently that large quantities or a mass of CCAs [collaborative combat aircraft] are the game-changer for success in the wargames and threat analyses.”

“The Avenger’s completely autonomous flight used an AI pilot for close to 30 minutes as a part of a cooperating live, virtual, and constructive UAS,” the company says.

“The flight was performed as part of GA-ASI’s ongoing commitment and investment into the development of advanced autonomy of AI and machine learning for UAS.”

The flight involved the company’s Reinforcement Learning architecture, which allows platforms to make decisions in challenging real-world scenarios. The work also involved Lockheed Martin’s TacIRST infrared search and track sensor. This generated live tracks of adversaries that the MQ-20A was then able to avoid.

“The flight was a tremendous success and demonstrated a number of ground-breaking capabilities in the race to operationalise autonomy for collaborative combat aircraft,” says Michael Atwood, GA-ASI’s senior director of advanced programmes.

“It’s exciting to see how AI can be used to advance how and where we fly unmanned systems as the complexity of the battlespace increases. Our ‘chase and avoid’ agent’s ability to dynamically update the flight path as threats were identified is the first step towards building an ecosystem of collaborative autonomous combat aircraft.”