Indonesian Aerospace has rolled out the first prototype of a medium altitude long endurance (MALE) UAV for which it sees a number of domestic missions.

The aircraft was unveiled on 30 December 2019 at Indonesian Aerospace’s Bandung factory, says the company, also known as PTDI. 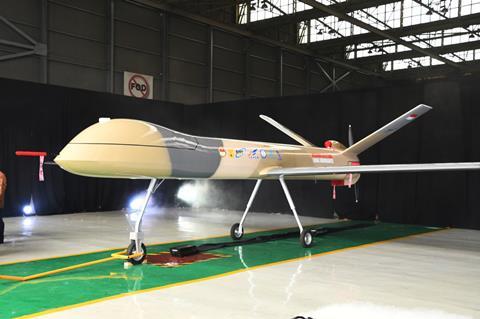 The ‘Elang Hitam’ will have an endurance of 30h, and be capable of carrying weapons.

Dubbed ‘Elang Hitam’ – Indonesian for Black Eagle – the aircraft has a conventional planform with a V-tail, pusher-propeller, a high aspect ratio, and tricycle landing gear.

Two prototypes will be built and used for both flight and structural tests. The company hopes to attain a type certificate from the Ministry of Defence’s Feasibility Centre in 2021, and a full military type certificate by 2023, which will include weapons.

Media reports that sensor payloads will include a synthetic aperture radar, but the first prototype appears to lack sensors, such as an electro-optical/infrared turret. The aircraft is powered by Rotax engine from Austria. The aircraft can be remotely operated via satellite.

Indonesian Aerospace adds that the flight control system is of European origin, coming from Spain.

The rollout of Indonesian Aerospace's MALE UAV on 30 December, 2019

One Indonesian official was quoted as saying that Jakarta has a preference for developing its own UAV to build its technology base, and that foreign suppliers of UAVs “won’t give key technologies for free.”

The company has been working on the project since 2015. After extensive studies, 2019 saw the commencement of manufacturing work for the two prototypes, including tooling and the production of composite parts in an autoclave.

Missions envisaged for the type include surveillance to counter problems such as terrorism, smuggling, piracy, forest fires, as well as illegal logging and fishing.