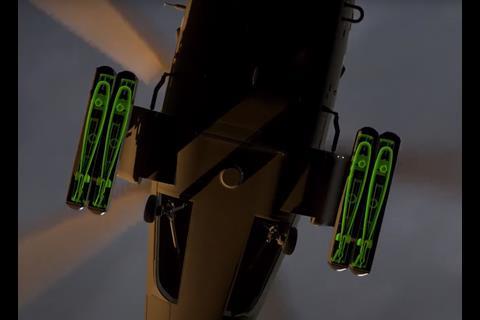 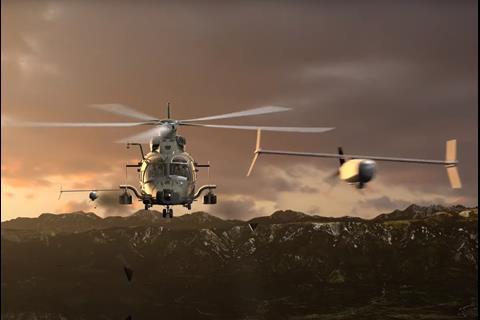 A KAI promotional video shows the LCH launching four UAVs, which then report reconnaissance information back to an operator in the helicopter

“The companies will cooperate to develop the next-generation UAS solutions for intelligence, surveillance, target acquisition and reconnaissance missions, based on both companies’ technological experience in the unmanned field.”

Elbit notes that it produces 10 different unmanned platforms ranging from small drones to large unmanned aircraft such as the Hermes family of UAVs.

KAI’s pact with Elbit came after it signed a similar agreement with IAI on 3 March to collaborate on loitering munitions for the South Korean military.

The pair’s joint announcement of the tie-up was light on details, but a KAI official told the Korea JoongAng Daily that it related to manned/unmanned teaming, specifically between KAI’s developmental Light Attack Helicopter (LAH) and air-launched loitering munitions.

“The manned-unmanned system will allow pilots to approach and launch unmanned, weaponised aerial vehicles that will fire on or bomb enemy targets without posing a risk to the pilots themselves,” he said.

In a November 2020 promotional video, KAI showed the LAH carrying four air-launched UAVs in canisters mounted on its winglets. The UAVs fan out and perform reconnaissance work, relaying data back to an operator in the helicopter. The data is also networked to other assets, such as fixed-wing aircraft and artillery units.

One drone is flown directly into a surface-to-air missile vehicle, destroying it.

The video also shows the KUH-1 Surion rotorcraft deploying a swarm of small drones to assist in a search and rescue operation for a wounded soldier.

The concept is similar to the US military’s work on air-launched effects, whereby a manned aircraft deploys smaller UAVs to perform specific missions.

KAI’s LAH and Light Civil Helicopter are based on the Airbus Helicopters H155.