MQ-25 winds up deck handling tests on US aircraft carrier

Boeing and the US Navy (USN) have completed a series of tests to assess the deck handling characteristics of the MQ-25 Stingray unmanned air vehicle (UAV) aboard an aircraft carrier. 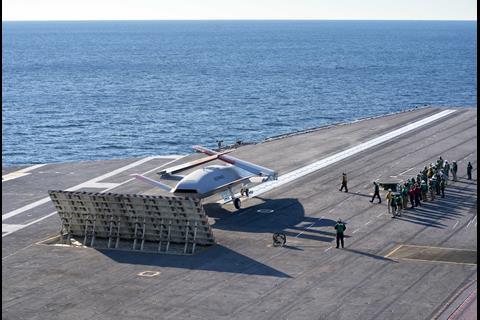 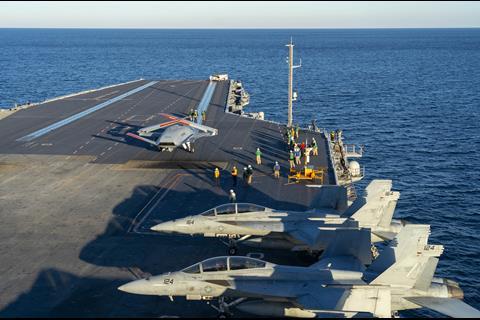 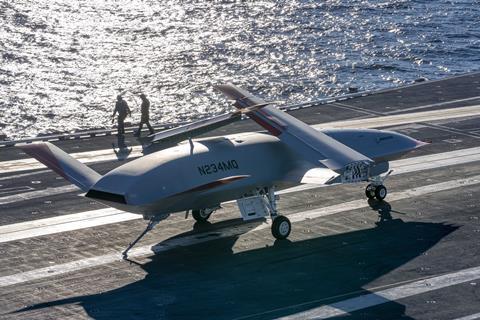 The MQ-25, designed to serve in the air-to-air refuelling mission, performed a range of movements on both the flight deck and inside the carrier’s hangar. During the project, USN flight deck directors – known as ‘yellow shirts’ – used standard hand signals to direct the MQ-25, which was controlled by a deck handling officer (DHO) using a remote control system.

Boeing says the control is easy to use and designed for young sailors who are familiar with video game controls.

The demonstration was designed to ensure the MQ-25 can integrate into the challenging environment of an aircraft carrier flight deck, both at day and night. The MQ-25 taxied, connected to catapults, cleared the landing area, and practiced parking.

“The navy has a rigorous, well-established process for moving aircraft on the carrier,” says Jim Young, chief engineer of the MQ-25 programme.

“The navy gave us two key performance parameters for the programme – aerial refuelling and integration onto the carrier deck,” adds Dave Bujold, MQ-25 programme director at Boeing. “We’ve shown that the MQ-25 can meet both requirements, and we’ve done it years earlier than traditional acquisition programmes.”

As a refuelling asset, the MQ-25 will offer several benefits to the USN. First, it will extend the range of carrier aircraft, allowing the ship to operate further from the enemy. This will be especially relevant in a conflict against China, given Beijing’s anti-access/area denial strategy, which would use long-range bombers and missiles to keep US forces at bay.

The MQ-25 will also free up Super Hornets that would otherwise be tasked with the air-to-air refuelling mission with special buddy tanks.

The USN has said it wants the UAV to achieve initial operational capability by 2024. It plans to buy as many as 76 examples of the aircraft as part of its programme of record.