NATO’s Joint Air Power Competence Centre (JAPCC) has released a study into the vulnerabilities that the alliance's in-use unmanned air vehicles have, claiming that the nature of UAV operations to date may have limited their development.

The paper – Remotely Piloted Aircraft Systems in Contested Environments: A Vulnerability Analysis – was issued in September, and claims that although the use of UAVs “became critical in the global fight on terrorism”, the systems have their limitations.

In contrast to manned aviation and ground operations, UAVs are currently only operated in permissive environments, where NATO forces do not anticipate a robust enemy air defence network, the paper claims.

Furthermore, this permissive air environment may have negatively influenced the most recent developments in remotely piloted air system technology: “This may have resulted in exploitable vulnerabilities in newly fielded or soon to be fielded RPAS,” it says.

The study considers medium-altitude, long-endurance systems – such as the General Atomics MQ-1 Predator used in operations for some 20 years – and high-altitude, long-endurance UAVs in its analysis, both of which have been operated in recent asymmetrical operations. As a continuation of this, it is expected that future adversaries will avoid conventional warfare and attack in irregular ways. 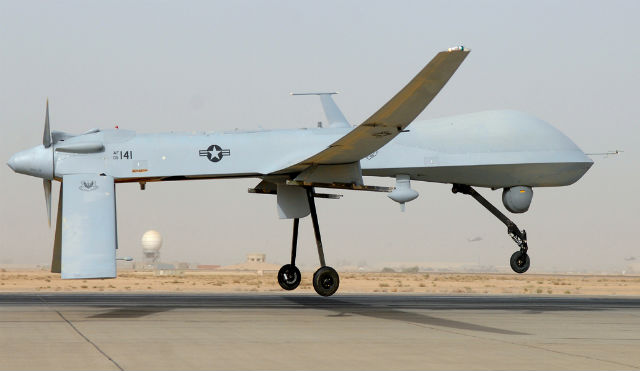 This could have an impact on UAV operators themselves, with enemies attacking the pilots of RPAS: “Attacking personnel rather than the RPA may be a favourable option for an adversary.

“Depending on the mission, RPAS personnel may be working at different locations,” the study says. “Within the area of operations, adversaries may engage RPAS personnel with any available weapons, for example combat aircraft, artillery or infantry.”

The JAPCC claims that there are numerous references to UAV pilots and personnel in the press, which suggests that there is sufficient information available to support enemies carrying out such attacks.

“The highest risk to airborne RPA will come from enemy air defence systems and combat aircraft, as they are designed to detect and engage aircraft at long ranges,” it adds. “However, even rocket-propelled grenades or sniper rifles could cause catastrophic damage to the airframe and payload if an adversary were within range.”

Each UAV is one of many elements of the overall RPAS network, each of which is vulnerable to cyber-attacks. Physical hardware could be attacked kinetically, and software subject to cyber-attacks.

“From the enemy’s perspective, the satellite’s receiving antenna and the RPA’s Global Positioning System antenna appear to be the most promising targets for EW engagements,” the JAPCC says.

The study concentrated on systems currently being used, but highlighted some future RPAS designs that would overcome the current vulnerabilities.

“It is very unlikely there will be a ‘one-size-fits-all’ solution for RPAS operations in a contested environment,” the JAPCC adds.