Crew error and a misunderstanding of the aircraft’s control logic caused a Northrop Grumman RQ-4B Block 40 Global Hawk unmanned air vehicle (UAV) to overshoot a runway and crash in a field 6.8 miles (10.9km) away.

A US Air Force (USAF) accident investigation report into the 6 August 2021 loss of the $64 million aircraft suggests several mistakes by the aircraft’s remote operators. There were no injuries in the accident. 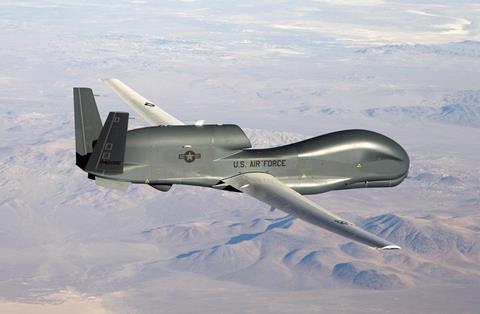 The RQ-4B took off on 5 August 2021 from Grand Forks AFB, North Dakota to fly a 23h sortie in support of an exercise. At 06:16 local time on 6 August the mission control element workstation locked up.

This development required that the aircraft return to base on an autonomous, pre-programmed route. At the time of the lock up the aircraft was at 54,000ft. This was 19,000ft higher than originally planned owing to a previous command override.

“However, the aircraft did not descend as planned because the mission control element pilot failed to sever the ground communications interface with the RQ-4 before it reached the initial approach fix,” says the report. “This initiated the aircraft’s autonomous missed approach route.”

The ground control interface was finally cut, but only when the aircraft passed over its final approach fix. Subsequently a second crew comprising a pilot and instructor pilot were able to re-establish a connection with the aircraft. Their orders were to salvage the flight and continue the mission.

The aircraft, by this point, was well into its missed approach routine. As the aircraft had already passed the final approach fix a second time, its control logic demanded a landing. Owing to the aircraft’s programming, overriding this final approach required an all new flight route, but neither the pilot or instructor were aware of this.

“Upon reaching the final approach fix, the aircraft was approximately 4,000 feet too high,” says the report.

The investigation listed a number of problems with the flight. It contends that the original lock up may have been caused by the pilot’s overwhelming the aircraft with several requests for detailed status reports in a short time.