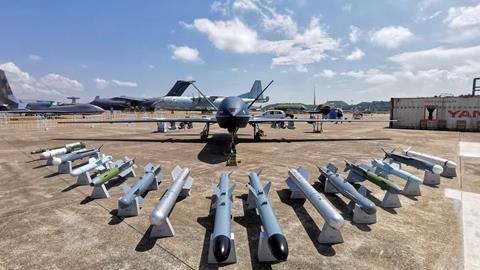 The Airshow China event again offers insights into the country’s unmanned air vehicle (UAV) ambitions, but it is far from clear which systems on display at Zhuhai will be fully developed, and which will remain concepts.

This year’s show is limited to those who live in China, owing to travel restrictions related to the coronavirus pandemic, but enthusiasts have flooded Chinese social media with imagery of systems on static display or in the show halls. Zhuhai, always a key event for China aerospace watchers, is particularly important this year given that last year’s event was cancelled. 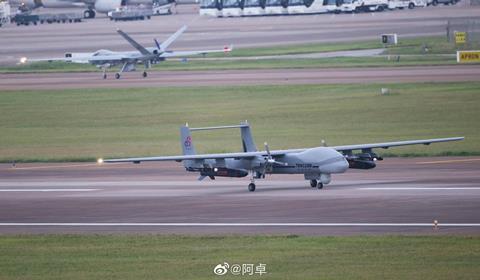 The TW328A prepares for its flying display, with the Wing Loong II in the background

Two notable highlights are the appearance of the AVIC Wing Loong II and Tengden TW-328A, which have both put on flying displays in company – and not military – liveries.

The Wing Loong II, which has already been exported to several countries, is a premiere export item for Beijing.

While the Wing Loong II is in service in China and other countries, this is the first time it has appeared in the flying display. The Wing Loong II’s published maximum take-off weight (MTOW) is 4,200kg (9,260lb), and AVIC brochures have shown the system carrying 10 air-to-ground munitions. Sensor payloads include an electro-optical (EO) surveillance/targeting system and a synthetic aperture radar.

The fork-tailed TW328 is powered by three turboprops. The aircraft in the flying display carries two large guided bombs, as well as four smaller ground attack missiles. In August, the Japanese defence ministry spotted a TB001 – on which the TW328A is based – flying over the East China Sea, prompting fighters to be scrambled. The system is not understood to be in Chinese military service. 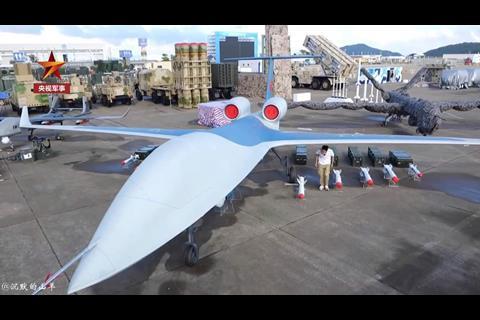 A mock-up of the ambitious CH-6 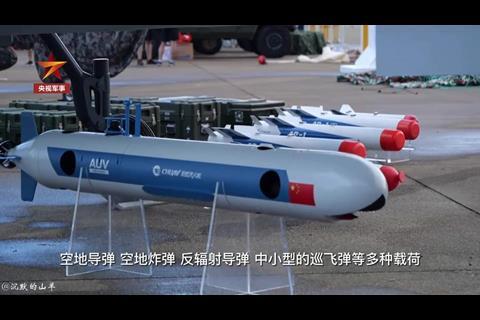 The airshow’s static display also threw up some notable surprises. One is the CASC CH-6, a large UAV with a T-tail and two turbofan engines mounted above the rear fuselage. The aircraft on static appears to be a model – Chinese social media showed it being assembled from a wooden crate – but in theory at least it is an impressive aircraft.

A report in the state-run Global Times gives the CH-6’s wingspan as 20.5m (67ft 2in), with a MTOW of 7.8t. It can carry a full range of sensor payloads, as well as various weapons. The type’s service ceiling is 49,000ft. No details were given, however, about development timelines for the CH-6. Notably, an autonomous underwater vehicle is shown as one of the type’s payloads.

Also appearing on static for the first time were the Guizhou WZ-7 and WZ-8. The WZ-7 is billed as a high-altitude, long-endurance system with a similar role to the Northrop Grumman RQ-4 Global Hawk. The WZ-7 features a unique joined-wing design that is claimed to improve its lift and performance. The type is understood to be in service with the People’s Liberation Army Air Force.

The WZ-8 is somewhat more intriguing. Powered by rocket engines, the sleek, delta-winged UAV first made an appearance on the back of a truck at China’s National Day parade in October 2019. It is believed that the type is carried aloft by a host aircraft, probably the Xian H-6N bomber, and then performs a high-speed, high-altitude reconnaissance sortie before recovering on a runway.

The status of the WZ-8’s development is not clear. The aircraft on static at Zhuhai is all but certainly a mock-up. Rivets clearly protrude from the aircraft’s skin, and what appear to be ordinary PVC pipes peek from beneath its rocket motors. 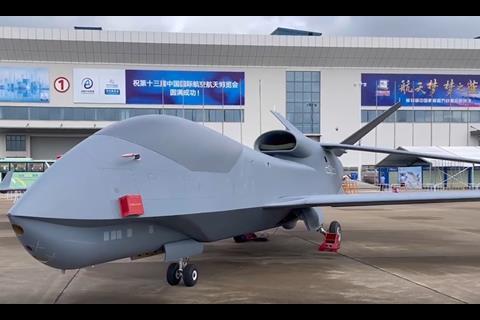 The WZ-7 UAV is understood to be in operational service 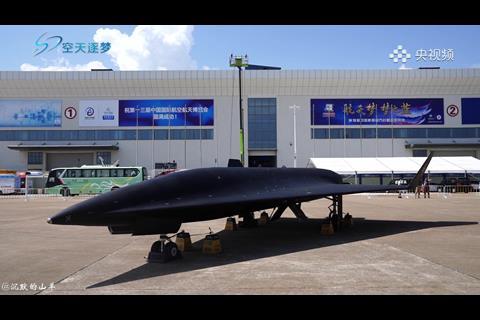 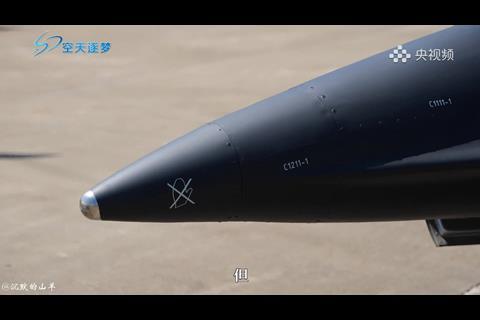 The WZ-8's nose. Jutting screw heads and poorly-fused seams are not consistent with supersonic, stealthy flight. 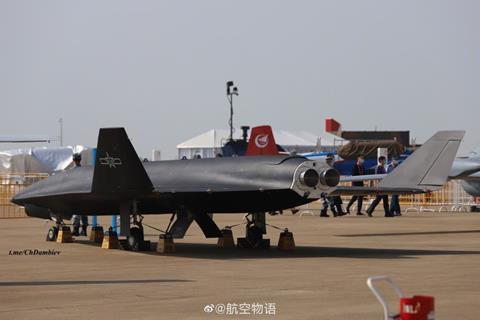 It is understood that the high-flying, stealthy WZ-8 will play a role in generating kill chains against enemy naval forces 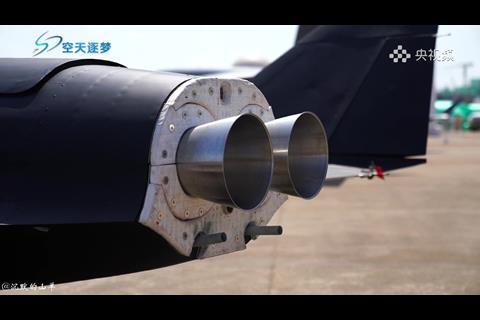 Also appearing in the static park are a CH-4 with what appears to be an under-slung surface search radar, as well as the civilian-roled Wing Loong 1D.

Indoors, the main AVIC hall contains a model of the GJ-11 delta-shaped unmanned combat air vehicle (UCAV), which resembles the BAE Systems Taranis or Dassault Neuron. Like the WZ-8, the GJ-11 also featured in the October 2019 parade mounted on a truck. The model has two weapons bays, each carrying four glide bombs.

In a similar vein is the CASIC Tian Ying UCAV, which also appears in model form inside the show. In 2018, a Tian Ying model appeared in the static park.

Finally, the CASC stand features a model of a UCAV designated FH-97, which is all but identical to the Kratos XQ-58A Valkyrie, a participant in the US government’s Skyborg effort to create ‘attritable’ combat aircraft. The model’s appearance led to immediate speculation that Beijing is also interested in following a similar path as the USA, with the FH-97 possibly controlled from a conceptual two-seat version of the Chengdu J-20. 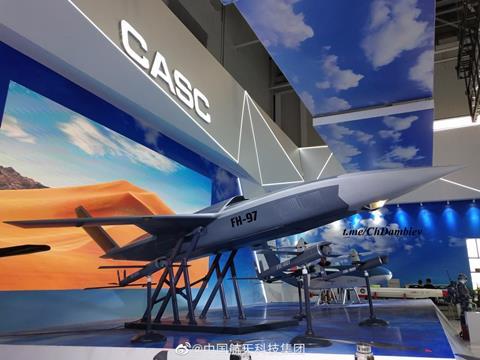 A model of the FH-97, which resembles the XQ-58A Valkyrie

Apart from the impressive displays of UAVs and UCAVs, however, little information is forthcoming in terms of development status, funding, or timelines.

That China continues to make advances in UAV technology is clear, but the sheer cacophony of ambitious systems on display at Zhuhai suggests that a good number will remain no more than mock-ups or models. Moreover, most of the systems are apparently intended to perform similar intelligence, surveillance and reconnaissance and strike missions. For the sake of efficiency, Beijing will probably want to focus only on the most promising designs.

Further, China’s aerospace sector will face considerable headwinds in the 2020s. The totalitarian bent the Chinese government has made the West increasingly wary of sharing aerospace technologies with China.

On the commercial front, Ottawa has declined export licences for the Pratt & Whitney Canada PW150C for the AVIC MA700 turboprop. The Comac C919 reportedly faces export licence issues as well. While Western suppliers are not present on Chinese military platforms, Beijing will have less access to dual-use technology in the coming years. This will trickle down to efforts to build UAVs.

From a budgetary perspective, Beijing will also struggle to develop a broad range of advanced systems because there will be other spending demands amid a slowing economy. And given that the Xi regime wants to play an ever more active role in allocating resources, it is far from clear that investment will go to the most promising aerospace and UAV technologies.

If nothing else, Zhuhai offers some idea of Chinese thinking about unmanned systems. The UAVs at the show cannot, however, be taken fully at face value.