Northrop Grumman and the US Navy have completed nine MQ-4C Triton test flights, and expect to ferry the first aircraft to NAS Patuxent River in Maryland this summer.

Northrop’s announcement of flight test progress, made on 6 January, comes amid indications that the Triton’s capabilities could be widened to include a ground-moving target indicator (GMTI) sensor, like that found on the US Air Force’s RQ-4B Global Hawk Block 40s.

Triton has now logged 46 flight hours, completing half its “envelope expansion” testing, during which the aircraft is evaluated at different altitudes, speeds and weights, says Northrop.

In flights performed from the company’s Palmdale, California facility, the first flight test vehicle has flown on flights lasting longer than 9h, reached and altitude of 50,000ft (15,200m) and performed “doublets” - manoeuvers which test the aircraft’s response to turbulence, says the company. 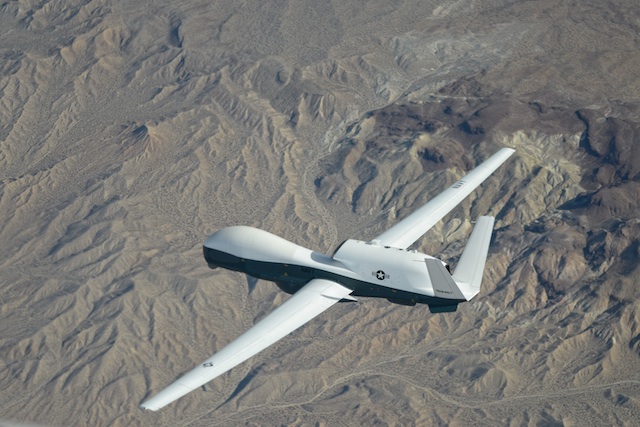 Based on the Global Hawk, Triton is a maritime intelligence, surveillance and reconnaissance aircraft that, together with Boeing’s 737-based P-8 Poseidon, is expected to replace the navy’s Lockheed P-3 Orions.

The USN expects to acquire 65 Tritons at an estimated programme cost of $11 billion. Initial operational capability is expected in January 2016.

Despite similarities with Global Hawk, wing structure differences and alterations allowing operations in marine conditions mean Triton must complete its own airworthiness testing, says Northrop. The company expects to finish initial envelope expansion testing by late February and will then install sensors and communications equipment.

By March or April a second aircraft will fly, and by May a software upgrade will be complete, Northrop says.

The company plans to move the first Triton to Patuxent River by the end of June and to begin one year of operational assessment testing by the end of 2014.

The USN should complete a six- to eight-month initial operational test and evaluation activity in 2017 and reach early operational capability by the end of the same year, Northrop says.

Meanwhile, Northrop says it has largely dealt with earlier issues with the aircraft's sense and avoid radar and mission management computer. It says it has also addressed wing manufacturing problems, after discovering “voids and wrinkles” created during bonding of layers inside the aircraft’s wing.

“We have gotten through those challenges,” Northrop says.

Though Triton is designed for maritime work, the US Defense Authorisation Bill for fiscal year 2014 suggests it could assume more duties for other military branches.

Signed by President Barack Obama on 26 December, the bill requires the US Joint Chiefs of Staff to study if it is “feasible, affordable and advisable” to outfit Tritons with a GMTI capability.

An earlier Senate version of the bill would have required the technology, and also classified Tritons as “joint” assets of the US military.

Northrop says a GMTI mode could be incorporated into the Triton's existing radar, or added elsewhere.