Administrators handling the collapse of UK-based MRO provider Monarch Aircraft Engineering (MAEL) are battling to sell the company’s few remaining assets after the coronavirus pandemic and its impact on civil aviation caused demand for spare parts to plunge.

In the latest progress report, filed to Companies House on 11 August and covering the period from 4 January to 3 July 2021, administrators from Interpath Advisory note that the “well-publicised consequences of the Covid-19 virus on the aviation industry have continued to impact the previously communicated strategy”. 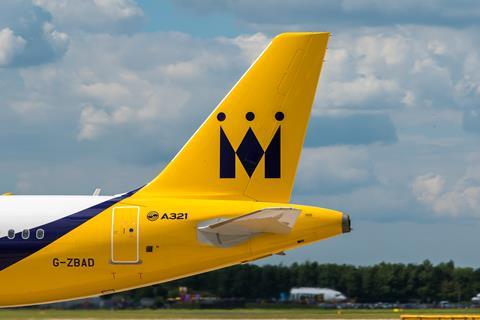 Although MAEL’s remaining tooling was sold as a package in March, for a little over £36,000 ($49,000) – taking the total raised from such sales to around £3.4 million – Interpath is struggling to dispose of its spare parts inventory.

“We are working with aviation industry experts to identify how best to realise the residual value in our remaining stock of rotables and unserviceable spare aircraft parts while the aircraft parts market continues to be adversely impacted by the Covid-19 virus,” writes joint administrator David Pike.

He points out that “soaring volumes of aircraft retirements” have led to a “massive increase” in the supply of used components. Reduced flying hours have also contributed to lower demand, he says.

Pike says that demand for the parts “may have been permanently superseded” by an influx of newer or better-condition spares into the global supply chain. Sales of MAEL inventory via its US “consignment partner” TSI Aviation “have effectively halted during the period”.

“The administrators and their agents are in discussions with the consignment partner and others regarding alternative options to realise whatever remaining value is available from the stock,” the report says.

Interpath continues to market three hangars at Luton airport in which MAEL held a leasehold interest. Two letters of intent were signed during 2021 and negotiations with one party continue.

“We will continue to pursue this assignment in the coming period with a view to realising what is the major remaining asset of the company,” says Pike. The sale of leasehold hanagrs at Birmigham airport previously raised £9 million.

In the meantime, the administrators have continued to market the hangars for short-term aircraft storage – but with little success. “Sectoral changes” driven by the pandemic have “extinguished demand” for hangarage, the report says.

However, the ongoing attempt to sell the leasehold means that the company continues to incur costs on the hangars, which required an agreement with Petrol Jersey – the recipient of any secured creditor distributions generated by the sale.

Petrol Jersey, a Channel Island-based investment vehicle of Greybull Capital, bought MAEL for just £1 from the administrators of the Monarch Airlines group. Greybull Capital also owned the carrier prior to its collapse in October 2017.

The Jersey company is the largest of MAEL’s secured creditors and is owed a total of £23.7 million by the collapsed MRO provider.

A £10.9 million debt to another secured creditor, PNC Business Credit, has been paid off in full, leaving any additional sums recovered for Petrol Jersey. However, the administrator notes there is likely to be a shortfall in this regard, although does not specify how large that deficiency will be.

Unsecured creditors, meanwhile, are likely to receive an estimated 0.4 pence for every pound they are owed. Claims total £138 million, according to the company’s statement of affairs.

The administration is due to be wrapped up by January 2022.