The Wichita team developing a Boeing 777-300ER converted freighter intends this month to announce multiple launch customers for the project, and is on track to begin manufacturing components within weeks.

“There will be two or three launch customers,” says Jim Gibbs, president of Kansas Modification Center (KMC), a company behind the project. “We plan to announce them at MRO Americas.”

That trade show occurs the week of 25 April. 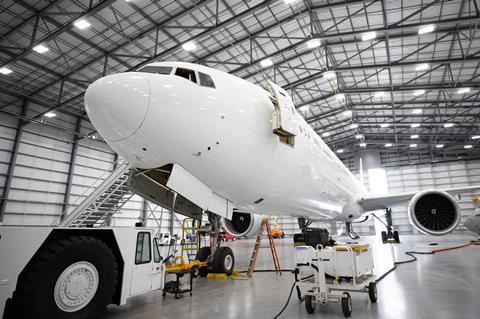 NIAR WERX first 777-300ER, a former Emirates jet that the MRO shop is converting into a freighter

The partners insist they have the experience, technical expertise and financial backing to bring their conversion to market. They say their aircraft will have operating advantages over competing aircraft, and that their modification plan will help ensure a smooth path to certification by the Federal Aviation Administration.

“We are looking at low certification risk,” says NIAR WERX programme manager Eric Kivett. NIAR WERX is an FAA-certificated Part 145 repair station that employs some 500 people, including more than 350 engineers and technical staffers.

“In two to three weeks, we will actually start the manufacturing of… parts of the aircraft,” adds Gibbs. Those parts will be floor beams. Gibbs’ firm KMC is the programme’s “umbrella contracting company” and will hold the converted 777’s supplemental type certificate.

NIAR WERX is providing engineering and technical muscle. It specialises in engineering services, aircraft modification and overhaul, flight tests and certification. NIAR WERX’s other programmes include modification and heavy checks of 737s and McDonnell Douglas MD-80-family jets, says Kivett. The division sits within NIAR, which is Wichita State’s aviation research and development institute. Started in 1985, NIAR is an experienced industry player, having worked with customers including Boeing, Bombardier, Spirit AeroSystems and Textron.

The 777 modification project will have help from a Dynamic NC, a Rose Hill, Kansas-based aerospace engineering and machining shop founded in 2005 by Gibbs, who sold the business in 2020. Dynamic will help source materials, fabricate components and supply the project’s large sub-assemblies, say executives.

The team is making notable progress.

In January, NIAR WERX submitted to the FAA a supplemental type certification application for the conversion. Last year, it announced having acquired its first 777-300ER – a former Emirates Airline jet manufactured in 2008, with serial number 37704. Gibbs says the team has stripped the jet and completed some ground tests, and is equipping it with instruments used to evaluate design loads.

NIAR WERX aims to complete preliminary design work by the end of the third quarter of 2022, to begin modifying the first aircraft in 2023 and to complete modifications before that year ends. The team is working to receive the project’s supplemental type certificate from the FAA in the second quarter of 2024.

Competition has been heating up in the air freighter market amid strong demand for shipments of e-commerce and express-delivery packages.

Avoiding such changes simplifies the programme and the certification work, he adds. Also, not needing structural reinforcements will make NIAR WERX’s aircraft 2,268-3,175kg lighter than competing converted 777-300ERs. As such, it will burn up to 91kg less fuel hourly on some missions, Kivett says.

“Most times, the last package can’t fit because of volume,” Gibbs says.

NIAR WERX’s jet will have room for 47 cargo pallets, including 33 on the main deck and 14 on the lower deck. It will have a main cargo door located forward of the wings that measures 3.8m (12.5ft) wide and 3.1m tall. The door will be part of a new sub-assembly that includes surrounding structure.

The jets will have forward cabins with lavatories, galleys and the option of seating for up to 11 people, and rigid aluminium cargo barriers between the cabins and cargo holds.

“This essentially has to resist about a million pounds of force,” Gibbs says of the barrier.

NIAR WERX will make only minor tweaks to 777-300ER cockpits, such as adding indicators related to the cargo door and the fire and smoke detection systems. “The main pilot interface is essentially the same,” Gibbs says. 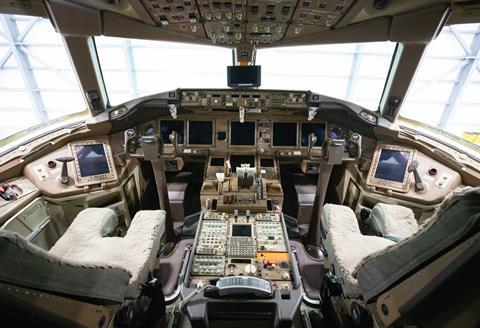 Gibbs declines to specify how much NIAR WERX’s converted 777s will cost, noting that options alter prices and that inflation continues driving up the cost of aluminium, nickel and other materials. However, he insists the project will offer “best-in-class pricing”.

Citing aircraft availability and demand for air cargo, Gibbs estimates NIAR WERX could sell up to 200 converted 777-300ERs, eventually at a rate of 18 to 20 conversions annually.

Since the start of the 777-300ER programme, Boeing has delivered 829 of the jets, of which 809 are now in service or storage, according to the airframer and to Cirium fleet data.

Boeing estimates the global air cargo market will support demand through 2039 of 1,500 converted freighters, though only an estimated 420 of those will be widebody jets, according to the airframer’s 2020 World Air Cargo Forecast.

NIAR WERX’s conversion has funding from Gibbs himself and from other “high-net-worth individuals in the Wichita area”, Gibbs says. “We are fully funded… We have plenty of cash reserves to finish the programme”.

Gibbs says such an undertaking could cost anywhere from $100 million to $150 million. “We are on the very low end of that,” he says, declining to be more specific. “Right now, in the market, money is pretty easy to attract”, he adds, noting that high inflation has left investors eager to fund attractive projects.