A multinational initiative to acquire a pooled fleet of Airbus A330 multirole tanker/transports has edged closer to take-off, with the Netherlands and Luxembourg agreeing to buy an initial two examples.

Agreed with Airbus in a 28 July contract via the OCCAR defence procurement body, the acquisition is the first part of a potentially broader activity being pursued by the European Defence Agency and several other nations.

“Final arrangements will be made in the coming weeks for the completion of the financial process resulting in a formal order,” Airbus Defence & Space says. This will also include an initial two-year package of in-service support, it adds. 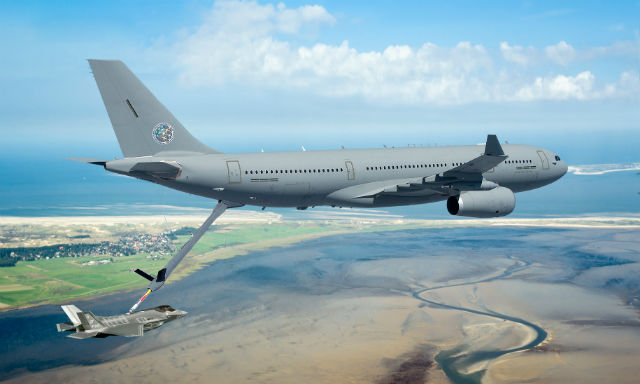 The Netherlands, the lead nation for the programme, values its acquisition at between €250 million ($277 million) and €1 billion, depending on the number of additional participants. Airbus says the addition of Belgium, Germany, Norway and Poland could eventually increase the size of the NATO-assigned Multinational MRTT Fleet (MMF) to eight aircraft.

Deliveries of the lead A330s for the Netherlands and Luxembourg will occur during 2020, with the type expected to have a service life of 30 years, the Dutch defence ministry says. The pooled fleet, equipped with boom and hose-and-drogue refuelling systems, will be operated from its Eindhoven air base; the home of the European Air Transport Command.

The ministry describes the planned purchase as “an important contribution in addressing the scarce tanker and transport capability of the EU in particular”. It will also replace the Royal Netherlands Air Force’s current two McDonnell Douglas KDC-10 tankers.

As part of the MMF initiative, the Netherlands says it is also “examining the potential of collaboration with France and the UK, among others, in relation to training and instruction, as well as maintenance” of the A330’s military derivative.