Airlines and airports warn Covid-19 checks could cause ‘summer chaos’

An “unprecedented operational challenge” is ahead for airports in the coming months, as they grapple with time-consuming Covid-19 checks and space-constrained facilities during the expected recovery in passenger traffic, according to key industry trade bodies.

“With each passing day, the prospect of travellers enduring widespread chaos at airports this summer is becoming more real,” says Olivier Jankovec, director general of airports association ACI Europe. “We absolutely and urgently need governments to step up advance planning on the full range of issues involved – and work more closely with airports and airlines.” 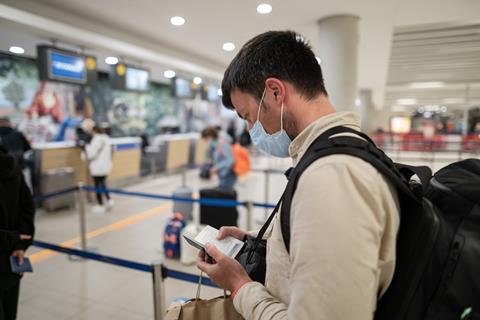 Already, according to IATA, passengers are spending an average of 3h on travel processes – check-in, security, border control, customs and baggage claim – at peak times, compared with 1.5h pre-crisis. That doubling of the processing time globally is happening with travel volumes “at only about 30% of pre-Covid-19 levels”, IATA explains.

“And if we get back to pre-crisis levels, we estimate that during the peak it could rise to about 8h,” Walsh says. 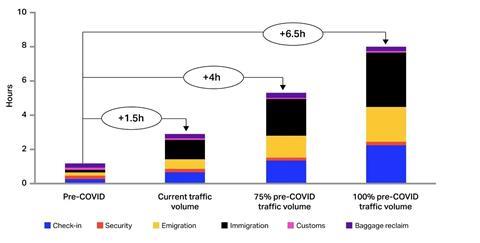 The IATA chief notes that the latter scenarios are “not going to happen, because airports will not be able to function in either that 75% scenario or 100% scenario if we have to continue to manually check paperwork”.

Highlighting that capacity challenge, ACI Europe says that even though August 2021 traffic levels in the region are expected to be “well below pre-pandemic traffic levels” – at around 125 million passengers – that still represents a “nearly three-fold” increase from the 47 million handled in May this year.

“Managing such an increase will amount to an unprecedented operational challenge due to the unique combination of… factors,” the airports body states.

Those factors include “multiple and diverse Covid-19 checks” – such as confirming proof of a negative test – which ACI Europe says often have to be completed manually and are sometimes duplicated during the passenger journey.

Airports also face space constraints as a result of “physical distancing” required to make facilities Covid-secure. At the same time, they expect to see large “peaks in air traffic”, with airlines concentrating their limited services at certain times in the day.

Among its proposals to address these issues, ACI Europe calls for the implementation of the European Commision’s proposals for fully vaccinated travellers to cross borders without restrictions and for bloc-wide digital travel certificates; the elimination of duplicated checks through the integration of departure and arrival processes; and the deployment of “adequate staff resources” at airports by governments to “ensure manual checks and border control processes do not delay travellers”.

From the airline point of view, IATA has called for “globally recognised, standardised, and interoperable digital certificates for Covid-19 testing and vaccine certificates”.

It describes the G7 discussions, which commence on 11 June, as “the next opportunity for leading governments to develop a solution”.

“This cannot wait,” Walsh says. “More and more people are being vaccinated. More borders are opening. Booking patterns tell us that pent-up demand is at extremely high levels. But governments and the competent authorities are acting in isolation and moving far too slowly.

“A smooth restart is still possible. But governments need to understand the urgency and act fast.”