American slashes 75% of its international capacity

American Airlines has slashed 75% of its international capacity in response to the drop-off in demand as the global coronavirus crisis continues.

Between 16 March and 6 May, the Fort Worth-based carrier will continue to operate just one daily flight each from Dallas and Miami to London Heathrow, it says on 14 March, in response to expanded travel restrictions from Europe to the US.

Earlier on Saturday, the US government announced that its European travel ban had been expanded to encompass Ireland and the UK, beginning on 16 March. That is in addition to the ban, which took effect 14 March, on passengers from 26 other continental European countries. 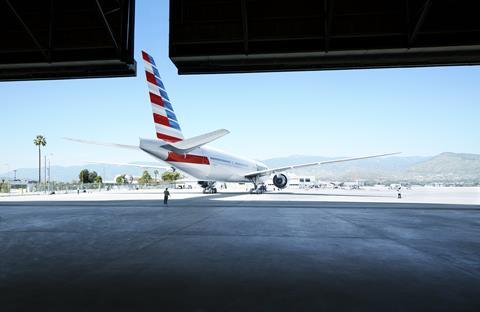 American adds that it will continue to operate three flights per week from Dallas to Tokyo. Those will be the only American non-stop connections between the United States and Asia.

Furthermore, the airline will suspend numerous, but not all, direct flights from its John F Kennedy, Miami and Dallas/Fort Worth hubs to several cities in South America, including Sao Paolo, Rio de Janiero, Bogota, Quito and Lima.

For the moment, short-haul international flights to Canada, Central America, the Caribbean and parts of northern South America will continue as normal, American says.

United will continue flying daily from the USA to Zurich, Brussels, Paris and Amsterdam, four-times weekly to Lisbon and “multiple” flights to Frankfurt and Munich.

Earlier in the week, Delta said it would be grounding 300 of its 910-strong fleet and significantly reduce its direct flights to continental Europe. On Sunday, it added that the only European destinations it will serve in the coming weeks will be Paris, Amsterdam, and London Heathrow. Africa service will go ahead as normal.