News that Norwegian may use its Boeing 737 Max fleet to open up new long-haul transatlantic routes confirms the expectation that airlines will capitalise on the greater range offered by new-generation narrowbodies like the Boeing twinjet and the Airbus A320neo.

Data from Flightglobal's schedules specialist Innovata shows that Norwegian is already among the leading group of airlines using single-aisles on long-haul routes. Speaking to Flightglobal at the Future of Air Transport conference in London on 30 November, the budget carrier's chief executive Bjorn Kjos outlined plans to use the re-engined narrowbody for new services from Europe to "secondary airports on the transatlantic [market]".

The UK city of Manchester is a "very interesting area, especially if you think about India", says Kjos. He suggests that the Max could be used to start flights to the USA from both Manchester and another UK city, Birmingham – a widebody being "too big" for such services.

Richard Evans, senior consultant with Flightglobal's Ascend consultancy, expects that network planners will make increasing use of the new single-aisle types to open routes and expand frequencies because the combination of their range and lower operating costs make them more competitive than widebodies on many city pairs. This will involve Boeing 737 Max and Airbus A320neo-family aircraft configured with lower-density seating operating routes traditionally served by widebodies or the 757.

There has been a trend over the past decade of airlines to use single-aisle aircraft on longer-distance services, he says, and this will continue with the re-engined narrowbodies from the two big airframers set to go into operation in the next few years. 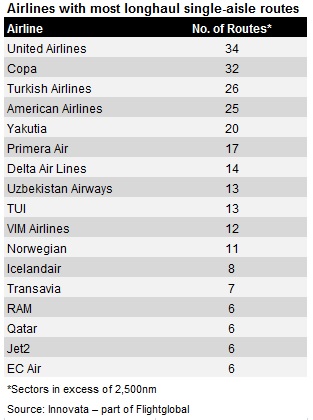 Currently, most airlines operating single-aisle aircraft on routes of over 2,500nm (4,500km) use the out-of-production 757. However, carriers such as Turkish Airlines, Copa and Norwegian are among those flying long-range services on smaller narrowbodies, says Evans.

Copa uses 154-seat 737-800s with a business-class section on several routes approaching 3,000nm. Its on-order 737 Max aircraft will enable it to serve cities 3,500nm from its Panama City hub, including Seattle and Vancouver.

Turkish uses narrowbodies to fly to cities not served by competitor Emirates' all-widebody fleet, with 151-seat 737-900ER serving routes of up to 2,915nm, such as Istanbul-Dar es Salaam. Its backlog of A321neo and 737 Max-8 and -9 aircraft, configured with a business class, "could offer some interesting opportunities in the 3,000 to 3,500nm range", including much of the Indian subcontinent, says Evans.

Norwegian, which flies 787s as well as 737-800s, also has the option of linking the eastern seaboard of North America to London with its on-order re-engined Airbus and Boeing narrowbodies, "especially if a lower-seating-density sub-fleet is utilised", says Evans. This would allow the Scandinavian carrier to compete with US 757 operators with 20% lower seat mile costs.

"The A320neo and 737 Max offer network planners even more flexibility than today," he adds. "For routes where belly cargo is not a big revenue generator, these types beat widebodies like the 787-8 and A330 on seat costs, and are much easier to fill. The next decade is likely to see many new services launched from hubs to smaller cities up to 3,500nm distance, as well as opening up new leisure destinations from major population centres."