Flights across European airspace in 2020 generated a fall in CO2 emissions that was largely in line with declining flight numbers, according to data released by Eurocontrol.

The air traffic management organisation notes, however, that there was “considerable variation” in the emissions reductions by country, driven by factors such as fleet make-up – including aircraft age and, therefore, efficiency – flight distances, the mix of market segments served and the decline in flights driven by the Covid-19 pandemic.

In terms of individual countries, Eurocontrol highlights Belgium’s relatively small CO2 emissions decline of 30% – against flights falling by around 50% – as an example of the impact of cargo services. 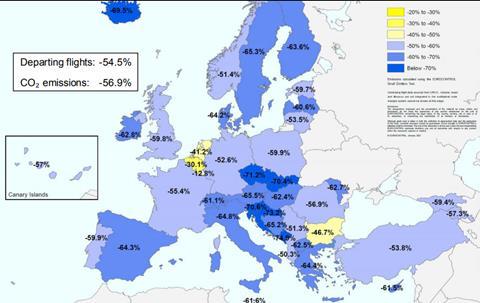 “Cargo flights use larger aircraft and fly further than the Belgian average, and therefore generate above-average CO2 emissions,” Eurocontrol states. “A second reason was that, due to short-haul cancellations, the average scheduled flight was much longer than in 2019, so emitted more CO2.”

On the latter point, Lufthansa Group chief executive Carsten Spohr noted during a Eurocontrol event on 21 January that Brussels Airlines had been able to maintain a higher proportion of its long-haul services than the group’s other carriers, largely thanks to its network focus on Africa, where border restrictions had been relatively light.

The relatively small CO2 decline in the Netherlands – 41% – came as KLM focused on keeping its long-haul network running during the crisis, albeit with reduced frequencies.

The largest falls in CO2 emissions – of 70% or more – were seen in Croatia, Czech Republic, Iceland, Montenegro, Slovakia and Slovenia.

Most other countries were within the 50-70% range.

The CO2 data for each country is based on flights departing from its airports, Eurocontrol states. Pre-pandemic, in 2019, around 85% of flights tracked by Eurocontrol were commercial passenger operations, with rest accounted for by all-cargo, business aviation and non-scheduled services.

The organisation’s C02 data does not cover Ukraine, Russia or Belarus. The latter two are not members of Eurocontrol.