Confirming its receipt of the complaint, the Bundeskartellamt says it will investigate the matter. Condor has not yet replied to a request for comment.

Lufthansa says: “As a result of the worst crisis in worldwide aviation, we are forced to significantly reduce our fleet, and unfortunately we need to cut thousands of jobs. It would be irresponsible to neglect capacity utilisation of our own aircraft and therefore endanger additional jobs at Lufthansa.”

The airline group told Cirium in December that its decision to terminate the feeder flight agreement with Condor was part of a wider plan to “prioritise utilisation of [the group’s] own capacity”.

That plan, Lufthansa adds, was made in early 2020 and included termination of wet-lease contracts with five partner airlines for around 30 aircraft in total. 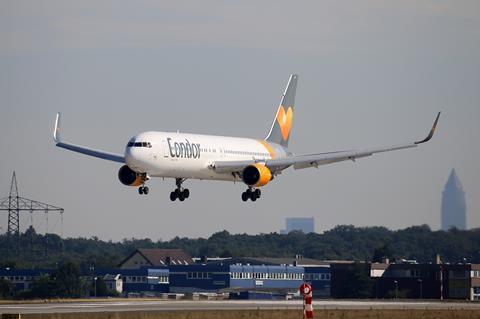 Lufthansa has decided to maintain commercial co-operations only if they secure jobs within the group, it says. “Contracts that result in a transfer of passenger flows from Lufthansa to other airlines will not be continued.”

The long-standing co-operation enabled Condor – a former Lufthansa subsidiary – to provide customers with mainline feeder flights into its own network within a complete package. Condor passengers were able to gain points in under Lufthansa’s loyalty programme.

Lufthansa notes that Condor will still be able to book Lufthansa feeder flights, but will not have access to preferential conditions.

Before the crisis, Condor operated long-haul flights from its Frankfurt base, Dusseldorf and Munich.