The European air traffic manager had, on 1 June, cited 64% as the likely outcome if countries relaxed travel restrictions sooner than expected amid successful vaccination programmes, with its baseline forecast being 52% and its worst-case scenario being 46%.

To exceed the “optimistic” scenario in August, flights would need to be above 69% of 2019 levels, based on the June forecast.

Flight numbers in July were above the best-case scenario.

Already traffic for the week ending 1 August was nearing that point, Eurocontrol data shows, hitting 68.3% of 2019 levels at 23,899 flights per day.

Ryanair was by far the busiest airline in terms of flight numbers during that week, averaging 2,175 per day. That was more than double the numbers achieved by any other carrier, aside from Turkish Airlines at 1,301. EasyJet was next at 1,074, followed by Air France (896), Lufthansa mainline (824), KLM (726) and Wizz Air (617). 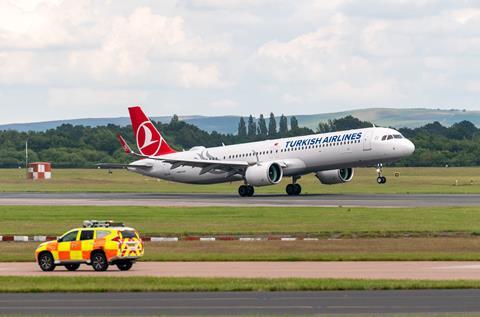