The boss of London Heathrow airport is urging the UK and USA to cooperate on a pilot programme to test passengers flying between London and New York for Covid-19 before they board to avoid them having to quarantine on arrival. 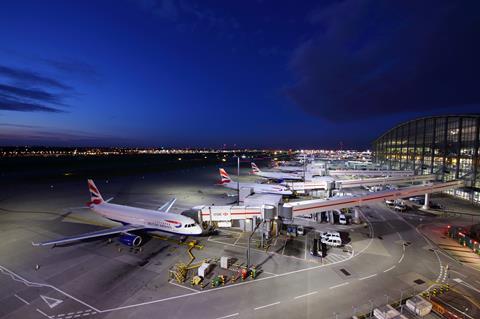 Heathrow and aviation generally are crucial to the UK economy, says John Holland-Kaye

Such a scheme, using the latest testing technology that can provide results within hours, would help kick-start one of the world’s busiest long-haul air routes and restore wider confidence in aviation, says John Holland-Kaye.

Speaking on an Aviation Club UK webinar today, Holland-Kaye said a bilateral initiative could be “up and running within a week or two” if both governments agreed on common testing standards.

“The UK is in a perfect position to lead this effort,” he says.

Holland-Kaye suggests that with current coronavirus infection rates below 1% in most countries, the vast majority of would-be travelers are virus-free. Yet, worries about importing cases has led many nations, including the UK, to impose quarantine restrictions of up to 14 days on those arriving from much of the world, with lists of at-risk territories changing at short notice.

“Few people will fly with this quarantine roulette,” he says. “We need a process that ensures that the 99% or more of people who do not have Covid can begin travelling again.”

He says that, if successful, the scheme could be extended to other popular destinations in countries with which the UK has a strong partnership, including the United Arab Emirates and some European states.

But he says that the impetus must come from industry itself. “The [UK] government does not have the bandwidth – it is worrying about schools, the health service, jobs, infection rates,” he says. “We have the opportunity to take the lead on this. If we can come to them with a solution, we have a better chance of making headway. If we just complain, we make their lives harder.”

Holland-Kaye says the UK economy is being particularly crippled by the pandemic because of its dependence on global trade and services. “We were a powerhouse going into this crisis, punching well above our weight, and aviation was the lifeblood of the economy,” he says. “Heathrow was the best connected airport in the world, and global companies chose the UK because of its easy access.”

The UK government’s failure to follow the example of the US and other major European countries to provide specific financial support for its airlines and airports will “put a limit on the recovery of the economy”, he says. “How does the UK plan to be global Britain coming out of this, if it is increasingly dependent on Air France and Lufthansa for global connectivity?”