In addressing the Aviation Club in London on 13 October, IATA director general Willie Walsh was back on familiar territory – both in terms of location and subject matter.

As head of British Airways from 2005 and then during a decade at the the helm of its parent company IAG, Walsh was seldom shy of questioning cost levels at its London Heathrow hub or – perhaps most evident at the height the ash cloud-related restrictions in 2010 – challenging the validity of air travel regulations or UK government policy. 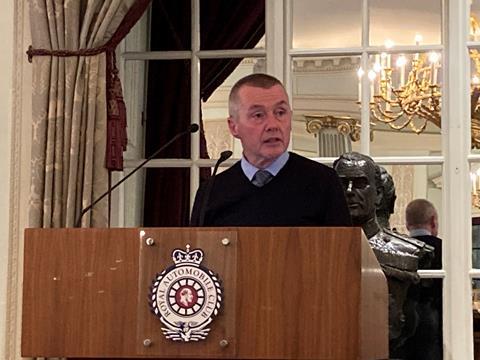 Walsh stepped down from IAG a little over a year ago, but in April took on leadership of the airline trade association IATA during what has been – and remains – the biggest crisis the sector has ever endured.

At its AGM in Boston earlier this month, IATA estimated airline collective losses would exceed $200 billion over the 2020-22 period, and large swathes of international travel markets remain either closed or subject to restrictions of varying degrees of severity.

While the UK is far from the only country where IATA has been vocal on the subject of airport charges and travel policy, Walsh took the opportunity of being back on UK soil to highlight issues he believes are holding back the recovery. Notably he criticises the UK, despite it taking a lead on vaccination and in establishing a roadmap to restart travel, for its continued impediments to travel.

“Instead of moving forward fast, it got lost,” says Walsh. ”The EU is now leading with many of the most sensible policies for restart.

”For example, the EU was faster than the UK to take advantage of rising vaccination rates to broadly re-open its external Schengen borders. In fact, it has largely done away with testing for vaccinated travellers. And for unvaccinated travelers, it is using cost-effective antigen testing. There are still many issues of harmonisation across the Union. But it is moving in the right direction and much faster than the UK.”

Walsh was particularly critical as to why controls remained in place for travellers given that most restrictions for the UK population have been dropped, especially given its reliance on the more expensive PCR testing.

“Over the period from February to August, the PCR test positivity rate of arriving passengers to the UK was 1%. And the positivity rate from testing the general population was 7%. So we can confidently say that travel is not increasing the UK’s Covid-19 risk.

”Yet, the UK still has mandatory testing for vaccinated arrivals. First, we must question why. And I don’t think that there is a good answer. Second, we must insist that the government learn from the mistakes it made,” he says, referencing what he terms “the state-sponsored rip-off” of the PCR testing industry.”

The UK is intending to scrap its requirement for a day-two PCR test at the end of month in favour of cheaper antigen tests, though Walsh flags concerns at the relatively high prices being quoted for this test.

”The government cannot let the antigen testing business evolve in the same way,” he says.

Walsh also warns of challenges ahead around Covid-19 documentation checking at airports as air travel returns.

”Travel health credentials will play a role for some time. Manual paper checks by airlines will be unsustainable as volumes come back,” he says.

”We need to automate the process and the UK needs to take the liability off carriers for these checks and introduce the tools and technology for government to quickly and efficiently undertake whatever checks it requires. Airlines are not the government’s border guards.”

While for much of Giovanni Bisignani’s tenure at IATA it was common place for the airline body to hit out at what they considered unreasonably high airport charges, in recent years IATA has struck a more conciliatory tone.

But notably during the AGM Walsh reignited battles by criticising airports that were increasing charges during the Covid recovery – prompting an angry retort from airport bodies.

”Heathrow is already one of the most expensive airports for airline operations,” he says. ”If Heathrow’s proposal is accepted, charges will rise from £22 ($30) to £42 per average passenger.”

”We all want to put Covid-19 behind us. But placing the financial burden of a crisis of apocalyptic proportions on the backs of your customers, just because you can, is a commercial strategy that only a monopoly supplier could dream up. Reducing costs — not increasing charges — must be at the top of everyone’s agenda. Heathrow cannot be an exception.”

The UK CAA, which regulates charges at Heathrow, in April rejected the latter’s request to increase its charges to airlines by £2.6 billion, deeming such a rise to be “disproportionate”. But it did allow the airport operator to raise its charges by £300 million in order to recover some lost earnings from the pandemic, while it will consider the issue of higher charges as part of its next price review, which will run for five years from January 2022.

“I think its important for everyone in the industry… to make an issue of this and the [UK] CAA has an important role in this,” Walsh says, arguing the latter has been “a little bit more aggressive” on the issue than they were in the past.

Walsh says he, together with some airline chief executives, have been invited to address the CAA board on the issue.

”I have heard more people complain about this than ever before,” he says. ”So I think the pressure will be on the CAA, the spotlight will be on the CAA, and their responsibility is to protect the consumer and I cannot see how almost doubling the charge at Heathrow is in the interests of the consumer, particularly as we are trying to recover the industry.”