Home carrier KLM has hit out at a move by the Dutch government to cut the number of annual permissible flights from the Amsterdam hub airport by 12% which it says would erode its ability to operate a hub function.

The reduction in flight levels at the airport is being taken to establish a ‘new equilibrium’ between flight activity and noise pollution at Schiphol and means the airport may not longer exceed the enforcement points for noise nuisance. In practice this means Schiphol can handle a maximum of 440,000 flight a year instead of 500,000, and is 20% less than the 540,000 envisaged under a previous government growth pathway. 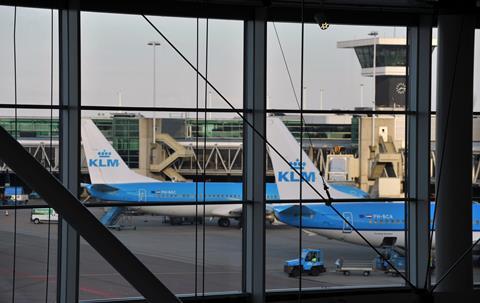 The upper limit is expected to take effect from November of this year. ”With this number of flights, Schiphol can maintain its international network of destinations,” the government says.

While it retains the long-considered option to use nearby Lelystad Airport as an overspill airport for leisure flights, environmental considerations are also being considered here. ”This takes some time. The cabinet will therefore not take a decision about Lelystad Airport before the summer of 2024,” it says

Dutch infrastructure minister Mark Harbers says: “I want to offer certainty and perspective to both the aviation sector and local residents. This decision forms the basis for a new equilibrium.

“Unfortunately, it contains a difficult message for the aviation sector, which is still fully recovering from the drastic consequences of the corona pandemic. In the coming period, we will further elaborate the decision on Schiphol in consultation with local residents and all stakeholders involved in aviation.”

KLM, though, argues the decision to cut back operations at Schiphol will have “dramatic consequences” for the airline and for the accessibility of the Netherlands.

”KLM is investing millions in a more sustainable fleet, thereby fulfilling its agreements with the government. These are long-term investments, which means we need to be assured of stability in policy,” the airline says. ”The government projected a future with 540,000 aircraft movements. Cutting back to 440,000 amounts to a 20% reduction.

”These cutbacks are announced without prior deliberation and proper argumentation. Apart from today’s announcement, KLM has not received any written notification or clear plans. KLM looks forward to receiving further details and will, in the meantime, consider what steps it may take in response.”

The airline adds that as a network carrier operating a hub-and-spoke system, the consequences of operating fewer flights means providing fewer connections.

“If KLM is compelled to relinquish slots, it will have to say goodbye to its smaller aircraft to subsequently focus on ‘more significant’ European traffic flows operating its bigger aircraft at a lower frequency. Other destinations will then disappear from the network,” it suggests. ”KLM’s intricately connected network – currently serving 170 destinations – will then no longer be tenable.”

Airline trade association IATA slammed the move, saying the justification for the cuts “is not supported by the facts”.

IATA director general Willie Walsh says: “This sudden decision is a shocking blow to aviation, jobs, and the economy of the Netherlands. It comes on top of a tripling of the passenger tax, and a 37% rise in airport charges.

“When governments shut down aviation in the pandemic, we all saw the terrible impact that it had on people in the Netherlands and its economy. Downsizing Schiphol will permanently destroy jobs that are only now recovering.”

The airport’s operator Schiphol Group says the move risks derailing ”a well-thought-out approach” that leads to the intended goal of connecting the Netherlands with the world, while making Schiphol increasingly quieter and cleaner. ”This provides certainty and perspective for all stakeholders involved,” it says.

”Together with the airlines, we will consult with the cabinet to contribute to such a well-thought-out approach,” it says.”The plans of the cabinet as presented now lead to great uncertainty and much remains unclear. We see that major risks are being taken with regard to the quality of the network. There is also the risk that going back to the old noise system would mean a shift in noise nuisance that would not be beneficial to the surrounding communities.”

It also hit out at the further delay on decision to potentially up Lelystad airport. ”It is disappointing that, contrary to the ambition expressed in the coalition agreement, a decision about Lelystad Airport will not be made until 2024. We hope this can be done sooner,” Schiphol says.