Face-masked and armed with hand sanitizer and disinfectant wipes, passengers in the USA are returning to air travel in slightly larger numbers even though coronavirus cases continue to steadily rise across the country and a possible vaccine could still be months away.

“I am aware of the risks involved in travelling and am prepared,” Wojciech Skrudlik, a passenger headed from Cincinnati to Poznan, Poland on 24 August, tells FlightGlobal.

“It’s a matter of being sensible about it all,” adds Colleen Connaughton, who was also travelling by air on 24 August.

Airports remain significantly less crowded than before the global pandemic, and airlines have slashed schedules. But thanks to passengers like Skrudlik and Connaughton, some flights are full, or close to it.

On an early-morning United Airlines departure from Las Vegas to Chicago on 24 August, all first-class seats and about 75% of economy seats were occupied. Middle seats were filled, too.

That said, the longer-term prospects for airlines are still difficult to judge, with US government funding running out in just over a month, and little sign of a sustainable, large-scale recovery. 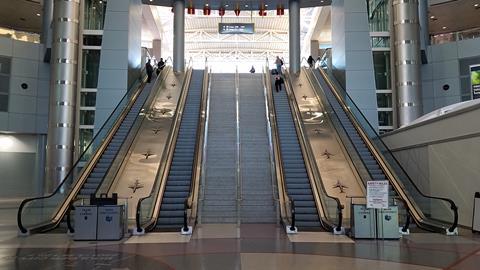 Skrudlik was headed to Poland following a work assignment in the USA. His trip had long been planned, and Skrudlik was not willing to cancel, even despite travel restrictions that add another level of complexity and bureaucracy to the experience.

He is one of those passengers seemingly undeterred by the pandemic.

Skrudlik also travelled for leisure recently from the Midwest to Florida and to the western United States.

“The national parks were so peaceful” – uncharacteristically free of huge crowds of foreign tourists, he adds. “It was easy to social distance there.”

The Transportation Security Administration says 841,806 passengers passed through its checkpoints on 23 August. That’s still lower than last year’s 2.5 million on the same day, but it is the second-highest number since 17 March, when lockdowns in many communities across the country took effect.

Connaughton, who flew from Los Angeles to Chicago, says she was wary about the trip. Sitting so close to so many strangers on an aircraft gave her pause.

But driving was not a viable option.

While leisure travel has made a bit of a comeback, business travel remains spotty.

Marco Di Maggio, travelling from Frankfurt to Denver on 24 August, says his company’s top executives had to approve his two-week business trip. It was an “urgent case” for his firm, and he was booked in business class rather than economy or premium economy. The aircraft from Germany to the US, he says, was relatively empty. Each business-class passenger had space to spread out across two seats. Of the 32 seats in that cabin, only 10-12 were occupied, he says.

Di Maggio felt safe in the skies. He has more concern about the situation on the ground in the USA.

“I am a bit afraid of catching the virus here in the US,” he says. “The infection rates in Denver are four times higher than in Germany right now. But I think if we take appropriate measures and are careful, it will be okay.”

A Bloomberg intelligence report published on 21 August predicts load factors will continue to sag in the third quarter, with capacity at about 50% of prior-year levels.

“Leisure travellers, boosted by low fares, may help in the US and Europe, but a resurgence of Covid-19 cases may cap demand at low levels,” the report says.

As of 19 August, US airlines had brought about 1,600 aircraft back into their fleets, bringing the total operating fleet in the US to 4,650 aircraft, a 51% bump from the mid-May low, data shows.

But analysts have warned that demand may slow in fall, and US government aid to airlines runs out in less than five weeks. The CARES Act, signed in March, provided airlines with almost $60 billion in grants and loans. But funding expires on 30 September, leaving many carriers to fend for themselves.

One stipulation of aid was that US airlines pledged not to exercise any involuntary furloughs or lay-offs before 1 October. With that deadline fast approaching, and no further legislation to extend the relief, the industry is bracing for mass lay-offs come the fourth quarter. Up to 80,000 air transport industry jobs could be lost in the US alone, airlines have warned.

Complicating both domestic and overseas travel plans for the foreseeable future are restrictions that remain in place or have been re-imposed as the coronavirus crisis continues to drag on into its seventh month.

An announcement in Chicago’s O’Hare International airport on 24 August reminded travellers from more than 30 US states that they are required to complete a 14-day quarantine upon arrival in Chicago.

Many other countries have placed the USA on their “high risk” list, and also require isolation or a recent negative Covid-test for entry.