As the deep water search for the Malaysia Airlines Boeing 777-200ER missing since March commences, Australia has released an updated flight path analysis.

The updated analysis issued by the Australian Transport Safety Bureau (ATSB) factors in an unanswered ground-to-air satellite call made to the aircraft at 18:39UTC on Saturday 8 March, 17 minutes after the last positive primary radar fix on MH370. It also benefits from further refinements to the mathematical model used to determine the aircraft’s course.

News of the failed phone call only came to light in late August, over two months after the ATSB released a report in June that provided significant detail about its inquiry based on satellite handshakes.

Analysis of frequency data related to the failed phone call indicate that the aircraft was on a southerly heading at 18:39UTC, which means it turned south somewhat sooner than previously expected.

This, in addition to refinements to the complex mathematical models used to calculate MH370’s heading based on seven satellite handshakes, have moved estimates of where the aircraft hit the water slightly to the south, but still on the ‘seventh arc’, where the aircraft transmitted its final SATCOM communication 00:19UTC.

“The latest analyses indicate that the next, underwater, phase of the search should be prioritised further south within the wide search area,” says the ATSB. “Work is continuing with refinements to the analysis of the SATCOM data. This ongoing work may result in changes to the prioritisation and locale of search activity over the period of the underwater search.”

The discovery that the aircraft turned south earlier than expected has clear implications for the aircraft’s fuel burn. At 17:07UTC, MH370’s last ACARS (Aircraft Communication and Addressing Reporting System) showed a total fuel weight of 43,800 kg. From this, authorities were able to extrapolate aircraft performance boundaries for a southern turn prior to 18:40UTC. 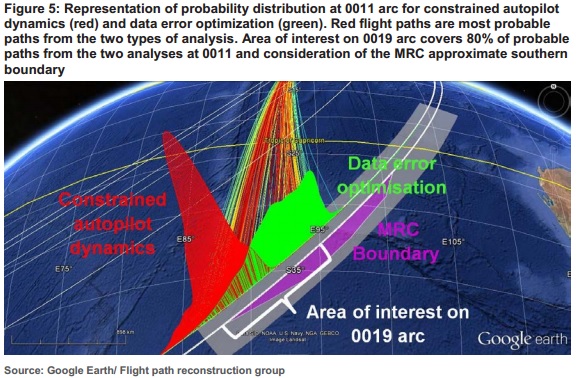 The ATSB also discusses possibilities for MH370’s last moments based on simulator work.

“The simulator activities involved fuel exhaustion of the right engine followed by flameout of the left engine with no control inputs. This scenario resulted in the aircraft entering a descending spiraling low bank angle left turn and the aircraft entering the water in a relatively short distance after the last engine flameout,” says the ATSB.

“However when consideration of the arc tolerances, log on messages and simulator activities are combined, it indicates that the aircraft may be located within relatively close proximity to the arc.”

The ATSB feels that the best spot to search for MH370 is along the southern arc between 33.5 °S and 38.3°S, and then move in both easterly and westerly directions.

It also warns that although it has “reasonably high confidence” in this search area, it “does not contain all the possible derived flight paths”.

MH370 disappeared on 8 March with 239 passengers and crew, while operating the Kuala Lumpur-Beijing route.