The appointment of Anne Rigail as the new chief executive of Air France is a positive end to a year in which gender diversity among airline leaders was thrust into the spotlight for all the wrong reasons.

Until now, Qatar Airways chief executive Akbar Al Baker's ill-judged "joke" at the IATA AGM about his airline needing a male leader because "it is a very challenging position" had generated the topic's highest-profile coverage. His comment overshadowed timely efforts by IATA to make gender diversity a key focus at the Sydney gathering.

The outrage at Al Baker's remark was understandably widespread, but even with the news of Rigail's appointment it remains to be seen whether there is genuine momentum towards more concrete developments going into 2019.

Speaking to FlightGlobal in mid-November, Flybe chief executive Christine Ourmieres-Widener expressed her doubts about the progress made up to that point. "If the issue is being taken seriously, we should see some changes... I haven't seen many fundamental changes so far," she said.

Indeed, Ourmieres-Widener's status as the only woman among the IATA board members in a photo from the AGM in Sydney (below) reflects the scale of the issue. An optimist might suggest that the current gender balance is so poor that even isolated shifts in the right direction – such as Rigail's promotion at Air France – have a noticeable impact. 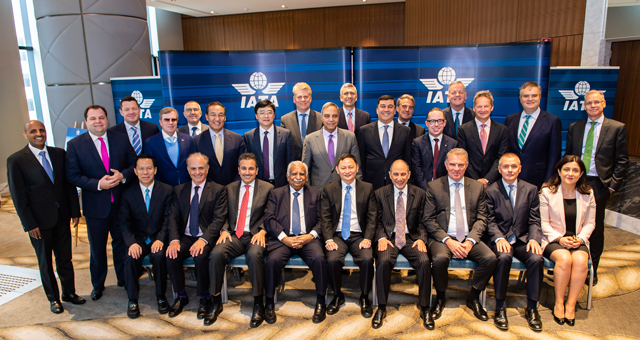 There is an imperative to fix the issue. As the airline industry teeters on the edge of what are likely to be more challenging times after a few years of relative comfort, having the right people at the top is going to be more important. Canny operators from different backgrounds will be needed to lead carriers amid likely economic pressures and a growing awareness among customers of the environmental and social impacts of rising airline traffic.

Gender diversity can help towards that goal, at the same time ensuring that an industry still heavily reliant on fossil fuels reduces the ways in which it might be described as "dinosaur" in its outlook.

On a fundamental level, employing the best person for the job is going to create a more successful business. If your recruitment practices are discouraging or excluding female candidates – intentionally or not – you cannot truly claim to be tapping the whole talent pool.

This is where the ripple-down effect comes into play. A highly capable female employee on the lower rungs of the career ladder is hardly likely to see her long-term future at a company that has an executive team and boardroom packed full of 60-year-old men. Ergo, talent is lost.

Then there is the simple fact that in an industry where the gender split among passengers tends to reflect that of the wider population, having a male-dominated leadership team serves to illogically narrow the range of life experiences with which to inform decision-making.

Airlines also have their own industry-specific reason for encouraging gender diversity lower down the pay scale: a looming pilot shortage.

"To work with just 50% of the population just doesn't make sense," EasyJet chief executive Johan Lundgren said at this year's Farnborough air show, referring to his carrier's efforts to attract more women into careers as pilots.

Lundgren and other UK airline executives know better than most that the industry could do more on gender diversity.

Earlier in the year, airlines based in the UK had universally reported that men in their employ earned more than women, with male employees dominating the highest-paid roles at all operators.

FlightGlobal's own data on female executives at airlines across the world helped to tell this bleak story, showing that just two of the top 100 airline by RPKs were run by women in mid-2018. Air France's Rigail joins Air Europa's Maria Hidalgo and VietJet Air's Nguyen Thi Phuong Thao in that small club.

Across the C-suite there had been a minor uptick in female representation year-on-year in FlightGlobal's survey, but barely enough to be statistically significant.

That's not to say there had been no progress before Rigail's appointment in the past 12 months.

Meanwhile, JetBlue Airways promoted Joanna Geraghty to president and chief operating officer in mid-May, making her the highest-level female executive in the US airline industry.

Those examples and others can be considered encouraging signs of progress, although they still feel like exceptions that prove the rule.

The next 12 months are therefore going to be important.

The lack of gender diversity in top roles is clearly not unique to airlines, but if the industry ends 2019 without several further landmark female executive appointments and compelling evidence of efforts to attract more women into the business, it is more vulnerable than most to being accused of not taking the issue seriously.

Airlines must grab the initiative and ensure 2019's gender diversity narrative is driven by positive stories.