Boeing’s aircraft deliveries and new orders continued to climb in June, reflecting what the company describes as airlines positioning themselves for recovery from the pandemic-driven downturn.

In June, the Chicago airframer logged 219 new orders and delivered 45 jets – recent highs for both those figures.

Still, Boeing’s customers cancelled orders for 73 aircraft during June, and Boeing removed another 56 aircraft from its backlog due to uncertainty about the likelihood that those sales will actually close. 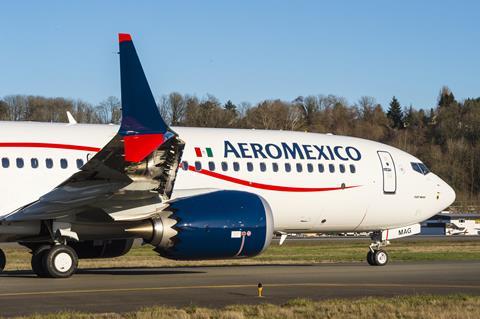 Boeing’s 219 orders in June included 200 737 Max ordered by United Airlines and 19 widebodies ordered by FedEx, comprising 18 767 Freighters and one 777F, Boeing says. The company has not landed so many new orders in a single month since June 2018, it says.

The orders were offset by the 73 cancellations. Those included 65 737 Max nixed by Flydubai, five 737 Max scrubbed by lessor BOC Aviation, one 737 Max Boeing Business Jet cancelled by an unnamed customer and two 737-700-based “Wedgetail” military jets cancelled by an unnamed defence customer. Wedgetails are airborne early warning and control aircraft.

“We continue the work to deliver on our commitments to our commercial, defence, space and services customers, while positioning our business for a stable and strong recovery from the pandemic,” Boeing says. “In the second quarter, we made progress in safely returning the 737 Max to service in more international markets and increasing the pace of 737 deliveries.”

In addition, Boeing removed another 56 jets from its backlog, placing them in its “ASC-606” accounting bucket. That bucket houses orders that remain under sales contracts but that Boeing suspects will not close due to reasons including the financial condition of buyers. Those 56 jets included 49 737s and seven 787s.

In the first half of 2021, Boeing landed orders for 599 jets, offset by 356 cancellations, bringing its net new orders for the six-month period to 243.