The missile has a range in excess of 350km (217miles) and can deliver both conventional and nuclear warheads "with pin point accuracy", Pakistan's ministry of defence said in a statement.

It added that the missile is a "low altitude, terrain hugging missile with high manoeuvrability".

The missile was developed by Pakistan's Air Weapons Complex and the National Engineering and Scientific Commission. Media reports from Pakistan suggest that the Ra'ad will be employed on Pakistan air force Mirage III aircraft as well as the Chengdu/Pakistan Aeronautical Complex JF-17 Thunder.

"The Ra'ad missile enables Pakistan to achieve strategic standoff capability on land and at sea," says the ministry. "[Cruise missile technology] is extremely complex and has been developed by only a few countries in the world." 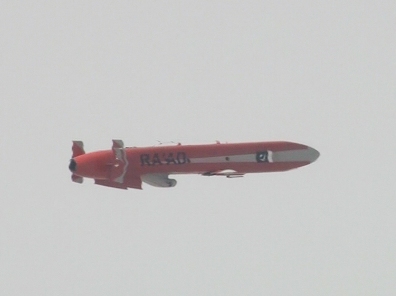