Ukraine's Antonov appears to have quietly launched a new programme at Paris for a jet-powered military and civil transport.

During an air show press conference, chief designer Dymitry Kiva identified the new type as the An-188, a turbofan-engined variant of the An-70 propfan.

In size terms it will sit between the Lockheed Martin C-130J and Boeing C-17 strategic transport, he says, possessing a maximum take-off weight of 140t and payload of 40t. It would also be able to operate from unpaved airstrips, he says.

Images displayed at the event showed an aircraft with four jet engines. These, and the avionics and systems, would be a mixture of "Ukrainian and Western products", says Kiva, speaking through a translator. 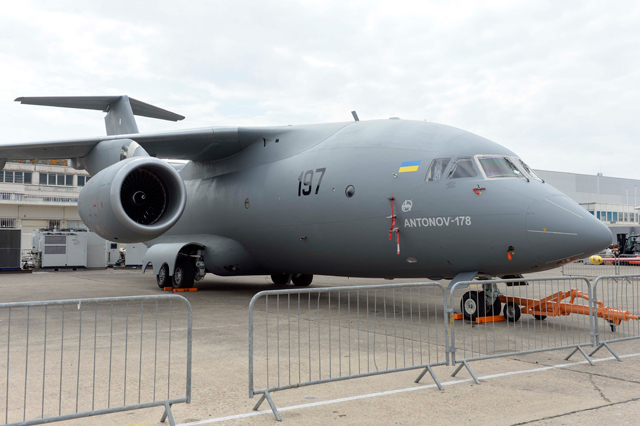 However, he gave no indication of which power plants the An-188 would use, nor of any potential date for service entry.

Antonov, which has its newest aircraft, the An-178 on its static display at Le Bourget, is also under new ownership, having been recently transferred to the nation's export sales agency Ukorobonoprom.

This, says the latter's director general Roman Romanov, will aid Antonov's ambition to become a "world leader" in aerospace.

As such, the business will now be in two parts: the Antonov design bureau on one hand and a management company on the other.

Kiev's trade minister Ruslan Demchenko says it had been one of the current administration's priorities to "restore the leadership of Ukraine's aerospace industry in the global market".

Certification and service entry for the An-178 are scheduled for the end of 2016. It forecasts a total market of 1,100 aircraft.