Honeywell has brought an industry veteran to Paris in the form of its Boeing 757 test aircraft, with this particular example making its Le Bourget debut.

The avionics-to-APUs manufacturer describes the former passenger aircraft - line number 5 - as a "flying science laboratory" which it uses to test all of its development technology.

Acquired in 2005, Honeywell spent over two years converting the twinjet into a flying testbed with the most obvious change the addition of a third engine pylon on the starboard side of the fuselage to enable engine trials. 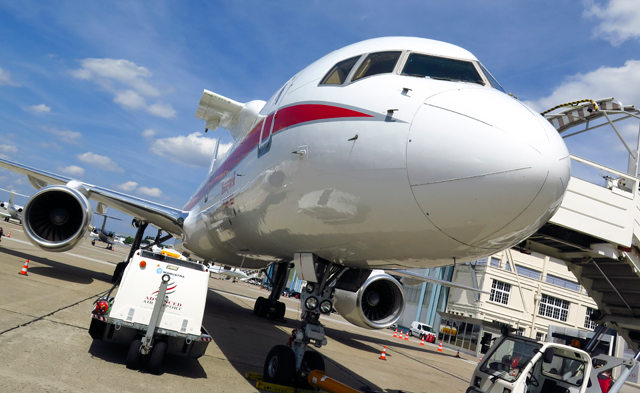 Honeywell most recently used the aircraft (N757HW) for tests of the new Jet Wave hardware that supports Inmarsat's GX Aviation high-speed in-flight connectivity, with several sorties performed from Birmingham airport in the UK in the run up to Paris.

Its engineers attempted to use many of the typical applications that airline passengers want to access during a flight says Carl Esposito, vice-president of marketing and product management.

In fact, one of the key evaluations was performed with YouTube, with Honeywell's crew - perhaps with a nod to Inmarsat's SwiftBroadband product - repeatedly streaming the video of US pop star Taylor Swift's hit, Shake it Off.

In a far cry from its high-cycle days ferrying passengers for Eastern Airlines, the 757 now averages around 200-300h per year.