The need to protect key infrastructure such as airports, sports venues and military facilities from malicious intrusion or attack using drones is becoming increasingly urgent – but the good news is that a growing number of companies are offering solutions to address the threat.

“We’ve seen all sorts of nefarious flying,” says Todd Probert, vice-president mission support and modernisation at Raytheon’s Intelligence, Information and Services unit, noting that private ownership of cheap and readily available small drones has rocketed over recent years. These have been used to smuggle drugs onto prison property, and conduct anti-personnel attacks in combat zones by carrying explosives.

The issue of malicious drone use has also grabbed headlines around the world, with major disruption caused at London Gatwick and Dubai International airports since late last year.

“Just about every month we have seen incursions within an airport environment,” Probert says. “We’re seeing just about every airport authority raising concerns. We’re trying to build that suite of tools so we can come in with the right solution at the right price point.”

Raytheon is showcasing a raft of capabilities at the show that it says allow military and civilian bodies to defend sites against unmanned air systems (UAS).

Larger threats can be engaged from range using the company’s Patriot air-defence missile system, and the company announced at the show that it is also equipping its Stinger surface-to-air missile with a new proximity fuze to enable counter-UAS firings. To be delivered to the US Army from later this year, the enhancement is “an affordable and effective way to defeat the growing number of enemy UAS targets in the skies above the battlefield," Raytheon says.

The US Army, meanwhile, has declared initial operational capability with its Howler system, which combines Raytheon’s KuRFS surveillance radar and tube-launched Coyote air vehicle to perform a “hard kill” capability against unmanned systems. 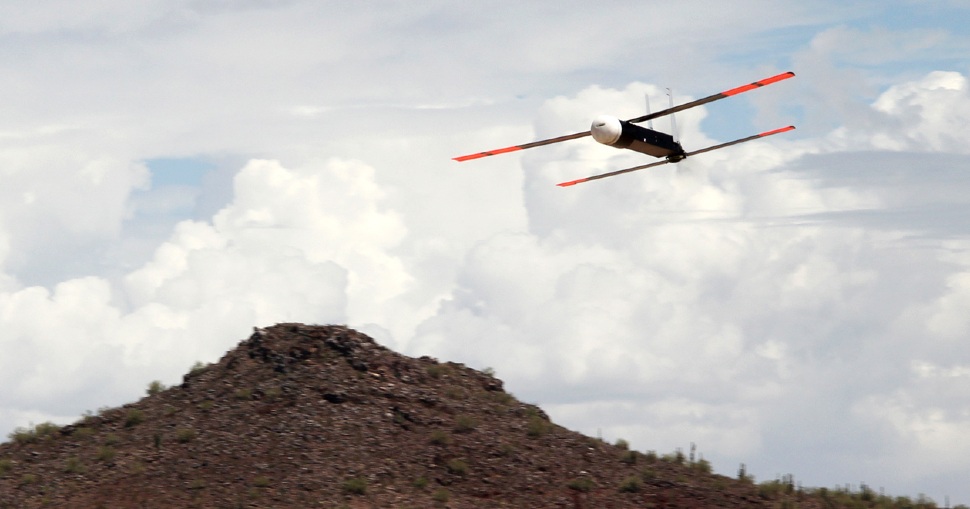 Using such equipment is not an option in an airport environment, however, so the US company is showcasing the ability to engage small drones using high-energy laser and high-power microwave systems. Both have already been demonstrated during trials with the US Army, and a 10kg (22lb) laser-equipped dune buggy-sized vehicle forms part of a simulation-based demonstrator at its indoor exhibit.

The suite of capabilities on display includes a radar for initial detection, after which an optical sensor is used to positively identify the threat, with their activities co-ordinated using Raytheon’s Windshear technology. Depending on the environmental conditions, the laser or microwave weapons can destroy the UAS, or jamming equipment used to disable its operations.

“It is silent, instantaneous, and it doesn’t miss,” says business development manager Evan Hunt. The system could be ready for operational deployment within the next year, he adds.

Speaking to FlightGlobal at the show, Raytheon Space and Airborne Systems president Roy Azevedo says: “This is an area where we utilise the breadth of the whole company, because we firmly believe that the counter-UAS solution is a layered solution – the customers may want to take the prosecution using different methods.”

The company is already delivering on its counter-UAS vision, says Probert, who notes: “We are delivering systems in less than the $1 million range for basic jamming capability. But those systems can get complex very quickly when you start to layer in various defences and effectors to that.”