A US Navy Boeing F/A-18E Super Hornet shot down a Syrian air force Sukhoi Su-22 in an engagement over Syria on 18 June. The US aircraft had been supporting Syrian opposition forces near Ja'Din, south of Tabqah, when the Su-22 released bombs against them.

US Central Command contacted Russian headquarters on a deconfliction hotline and called on Moscow to use its influence to "de-escalate the situation and stop the firing", according to the Pentagon. Despite warnings to the Syrian pilot on an emergency radio channel, the Su-22 remained in the area and was immediately shot down, in “accordance with rules of engagement and in collective self-defence of coalition-partnered forces”, the Department of Defense says.

The Syrian government called the action a “provocation” and said its pilot had been killed.

The only USN aircraft carrier in the region is the USS George HW Bush (CVN-77) and the only F/A-18E unit embarked is VFA-31 "Tomcatters", making this the most likely unit involved. 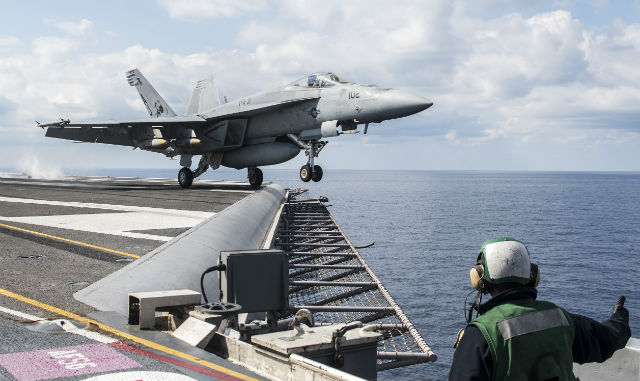 This is the first known aerial victory for a Super Hornet, and the first USN "kill" against a manned aircraft since 1991.

Asked at the show if he knew which weapon was used in the engagement, a Raytheon representative said enquiries should be directed to the US Navy, “but it was either an [AIM-9X] Sidewinder or an AMRAAM”.