The estimated cost of acquiring 2,457 Lockheed Martin F-35 Lightning IIs has dropped by $12.1 billion, or 3%, compared to Pentagon estimates one year ago.

That’s according to a US Government Accountability Office (GAO) report published this week, which says the total acquisition cost is now estimated at $379 billion, down from the $391 billion reported in last year’s annual selected acquisition report (SAR).

The good news comes as the F-35 Joint Programme Office faces schedule pressure in completing initial operational test and evaluation of the “full warfighting capability” provided in Block 3F, with some estimates now pointing to mid-2018 “at the earliest”.

It also comes as Canada and Denmark consider whether to stick with their planned fighter acquisitions or withdraw from the multinational programme and selected alternative combat jets.

According to the GAO report, authored by Michael Sullivan, the US Defense Department plans to spend $12.7 billion per year on average through 2038 to complete its planned purchase of three variants for the US Air Force, Navy and Marine Corps. Just in the next decade, the annual tab for F-35-related expenses will be $14 billion.

When the Joint Strike Fighter contract was awarded to Lockheed in 2001, it was estimated that all jets would be in place by 2026. 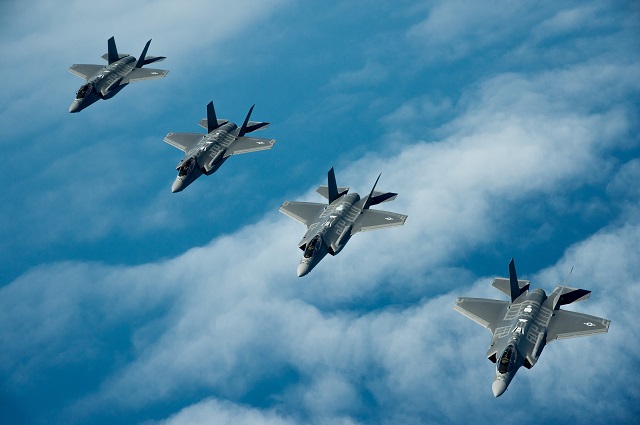 The full SAR, which tallies acquisition cost estimates for every major US weapons programme, is slated for full release on 24 March. It is likely to help the Pentagon counter arguments by US lawmakers and JSF critics that the current planned F-35 buy is “unaffordable” and the planned numbers should be revised down.

The GAO notes that F-35 buyers are also about embark on a costly modernisation programme that will increase annual costs further. Known as Block 4, it adds new weapons and capabilities to the aircraft beyond what is provided in the baseline Block 3F configuration.

According to the congressional watchdog, the Pentagon plans to spend $3 billion over the next six years on the Block 4 programme, which Sullivan contends should be split off from the F-35 programme and be funded as a separate entity, or major weapons acquisition programme. That arrangement is already in place for the Lockheed F-22 Raptor, after its modernisation project experienced cost and schedule growth.

Planned funding for Block 4 rises 634% to $668 million between now and fiscal year 2021, according to GAO numbers. Approximately $91 million has been appropriated in fiscal 2016 to get the modernisation effort started.