The world’s biggest aircraft – the Hybrid Air Vehicles Airlander 10 – left its hangar for the first time on 6 August, and will fly once a series of checks have been completed while the airship is tethered to a mast.

These “outside tests” could take “from a few days to a few weeks, but we’re aiming for it to be as short a period as we can in order to conduct the tests that ensure we know we can safely fly,” says HAV technical director Mike Durham.

Bedford-based HAV spent the days before the “float out” completing in-hangar checks of engines, systems and control surfaces before a “suitable weather window” at the weekend allowed the aircraft to emerge from the hangar.

The company – which originally developed the 92m (302ft)-long type for a defunct US Army programme – is repositioning the Airlander 10 as an aircraft suitable for carrying sightseers, surveillance equipment or specialist cargo. It had originally hoped to have the Airlander 10 ready for a high-profile flyover during the Farnborough air show in July.

Once it flies, phase one of its test programme will involve some six 3h sorties within a 15nm (28km) radius of its Cardington base, flying visual flight rules and at a ceiling of 4,000ft, before it moves onto a second “more ambitious” stage, says Chris Daniels, head of partnerships and communications. 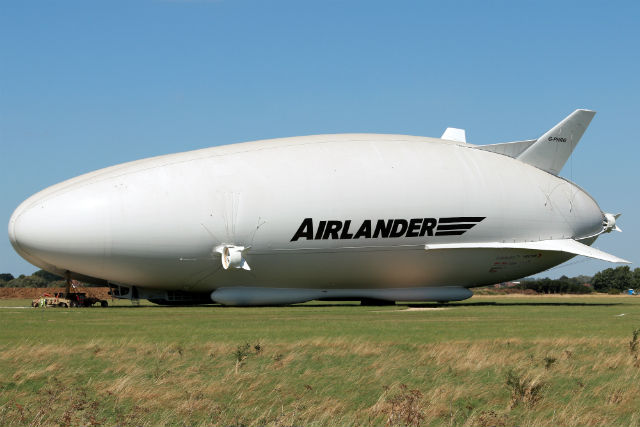 That second stage, agreed with the European Aviation Safety Agency, will entail flying up to a total of 80h at a ceiling of 10,000ft and within a radius of 75nm. That would have been enough to reach Farnborough for a flight over the event, something that would have provided a huge marketing coup for the show organisers and the project’s backers, who include rock singer and aviation entrepreneur Bruce Dickinson of Iron Maiden.

HAV plans a total of around 200h flight testing on its single prototype this year before designing a production version of the aircraft to be ready to deliver in 2018. That iteration is likely to incorporate a repositioned 19-seat passenger cabin, also capable of carrying a 10t payload of cargo or camera equipment, as well as an integrated mooring mast, enabling the Airlander to land without on-ground support. It would also be able to descend onto water.

Thanks to UK and European Union grants, and because the US military funded the bulk of the development before cancelling the long-endurance, multi-intelligence vehicle (LEMV) programme in 2013 and returning the prototype to HAV, UK owners have only sunk £15m ($20 million) into the programme. With a £25 million price tag, the company needs to sell only two aircraft for them to recoup their investment, says Daniels.

However, the long-term ambition remains a 50t-payload Airlander 50, an aircraft capable of carrying sufficient cargo to make it viable for cargo operators looking to transport equipment to remote areas inaccessible by road or sea.

The 119m-long airship would have a range of 1,890nm and be able to carry six standard shipping containers. “Fifty tonnes is the sweet spot for cargo operators,” says Daniels. “That would open up a whole new market for us.”

The 44m-wide and 26m-high Airlander 10 has a helium-filled laminated fabric envelope, which provides up to 40% of the vehicle’s lift thanks to its shape – an elliptical cross-section containing internal diaphragms. These give it a twin-hull appearance from the front – under which the crew and passenger/payload compartment is fixed – and a triple-hull appearance from behind. Power comes from four 350hp (257kW) Centurion engines – two mounted forward on the hull and two on the stern.